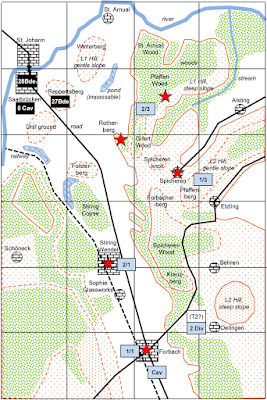 My leading unit (the 27th Brigade) had deployed as close as possible to the  French and attempted to assault straight away, but it was stopped in its tracks by defensive fire and was disordered. This pretty well set the pattern for the initial turns.

I was confident that I could overwhelm the isolated French units in the north by pinning them frontally and turning their right flank. However, despite their strategic passivity and lack of good generals, a series of very exceptional movement rolls allowed the French to bound forward.

The French begin to create a strong and continuous line on the edge of the steep and mostly wooded slope that runs north-south. This position provided cover, impeded any assaults and gave the French a clear field of fire over the open approaches. It represented the ultimate achievement of the French tactical doctrine of obtaining a "position magnifique".

By moving another unit to complete an 'L shape', my advance was not only boxed-in but dangerously enfiladed. The leading Prussian units were decimated. This was going to be a costly day.

I continuously attempted to assault the French line but by the end of Turn 4 the Prussian units in the north were suffering variously from being spent, disordered and low on ammunition. The situation looked grim!

Under the scenario rules, the Prussian reinforcements can enter from the west on turn 4 or delay their arrival to turn 6 and enter from the south. I decided to enter on turn 4. Had I delayed things I might have been able to stretch the French a little further.

Despite my difficulties, this was no time to stand around. I pressed home the attack and by coordinating it I prevented the French from concentrating their fire. By sheer weight of numbers I finally burst through the centre of the French defensive line.
My southern force, meanwhile, attacks the objective of Stiring Wendel. The French are thrown out. I now hold two objectives - a draw under the scenario conditions.
But the French counter-attack and I lose Stiring Wendel...

The French also counter-attack in the north but they are not so lucky...

It's difficult to find much use for cavalry in this period but I sent my single cavalry unit on a wide outflanking march which obliged the French to divert two artillery units to protect their rear.

By the end of Turn 5 the Prussians had lost 11 bases to the French 3.

Emulating the Charge of the Light Brigade, the cavalry attacked the half-strength French artillery protecting their rear. The artillery should have counted as only one base which would have given me this combat. As it was, my cavalry bounced and were subsequently destroyed.

By the end of Turn 7 the French centre is weak and open. We are waiting for Turn 8. It's do-or-die for both sides. By this time the French player is complaining bitterly about low dice rolls. C'est la guerre.

In the final turn of the 8-turn game I had another go at taking Stiring Wendel but was thrown back.

If my clipping exploitation move counted as taking the objective, I had secured two objectives and just scraped a draw. My opponent was reluctant to accept this! In this last turn, everything had hinged on two decisive dice throws. If I had won both I would have won the game.  If I had lost both I would have lost the game.

The casualties were tremendous. The French lost 12.5 bases, the Prussians 22. We completed the game in about 5 hours. This was our first full-sized game of BBB and the first we've fought to a proper conclusion. It was a memorable struggle and a very close run thing.

I always find that these grand-tactical games representing the great narratives of military history have an epic quality. Our next game will be an American Civil War one so that we can see how the rules play out at the early end of the technological spectrum. By now we have gained a reasonably good grasp of the rules and are enjoying them.
Posted by doctorphalanx at 19:23:00