I recently received delivery of a Hotz ArtWorks 'Enhanced European Fields' game mat for Rommel. It arrived in the UK from the USA only eight days after ordering - the usual great service and great quality.

It measures 72" x 46" and has 4" hexes arranged 18 x 12. It will serve as a less heavy, less bulky alternative to Hexon for club games. I could have gone for squares but consistency will make it easier to get used to the game and I will be able to use Hexon hills and my planned hex BUAs and hex woods etc.

The 4" hexes are principally for my forthcoming 3mm armies, but my 10mm armies on 30mm wide bases will also fit.

Rommel: Maximum base sizes for 4" hexes?

I thought I'd better test my 40mm square basing idea more rigorously in order to ensure there is enough wiggle room when the surrounding hexes are occupied.

That conclusively establishes that if using Hexon I need to aim for 40mm x 30mm bases for optimum effect. Now the bases... 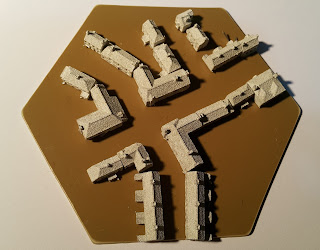 My epic indecision about what base sizes and grids to use for Rommel has come down to a trade-off between the attraction of multiple vehicles on big bases with a 6" square grid versus the attraction of using Hexon with necessarily smaller model bases possibly featuring only one or two vehicles.

Other than the Hexon itself, the game requires BUAs, woods, bocage, soft ground and rivers. In this post I am looking at BUAs and woods. 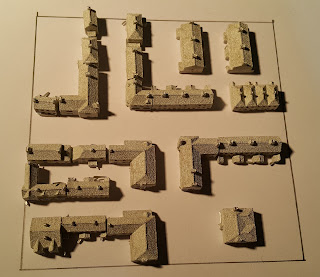 The heading picture (top right) shows a mock-up of a 4" hex BUA using a Hexon forest template and some Brigade Models 2mm buildings from the English Village and Terrace sets. I think these are fine for Belgium but Northern France and Low Countries sets are planned and those will be even better. The buildings are roughly the same height and the bases will sit on top of them when the hex is occupied. If I add taller buildings like churches and factory chimneys, these will have to go at the centre or close to the edges. The 4" hex is economical on buildings and looks 'neat' IMO.

For contrast, the next picture shows a 6" square with a very Roman street pattern. It requires quite a few more buildings and doesn't look very organic. Perhaps I could have arranged the buildings more imaginatively, but there is an inevitable tendency for squareness to beget squareness. Put a few of these on the table and it begins to look like a chess board. Of course, you don't have to make the towns square just because they fit into a square, but given that I will be placing the units on top I need to have the areas filled to give even support. 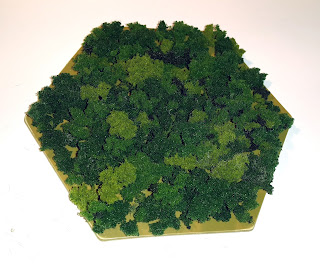 Finally, we have a mock-up of a hex wood using Woodland Scenics Underbrush of various different colours.

I think the combination of these pieces with Hexon flocked tiles will begin to look quite realistic in a hexed sort of way.

Although using smaller model bases is disappointing, I think the game will look good overall. It also provides a very fitting purpose for all that Hexon I've accumulated...
Posted by doctorphalanx at 03:11:00 5 comments:

I like the aesthetic of depicting a whole platoon of 3mm miniatures on a large base, but I'm still weighing up the practicalities. I now have the rules in my hands thanks to Caliver Books and I got a PDF copy as well for study when I am out and about. I see the conversion to hexes in the Advanced Rules is straightforward, or, at least, left to the player.

It prevents use only of the 'Gaps in his Lines' rule, but Peter Hunt (Bertie on TMP) has suggested the following: "We just made it that if a unit is in the ZOC of two enemy held hexes it cannot move into a vacant hex that is in the ZOCs of those same two enemy held hexes unless it is using "Gaps in his Lines." So you can use the rule for what is intended: going around or through a loosely held enemy line."

So what are the pros and cons of switching from the default 6" grid to 4" Hexon hexes?  First the pros:
The cons:
Anyway, I don't have to decide now. My first game will be with counters and then my existing 10mm armies.
Posted by doctorphalanx at 02:22:00 10 comments: