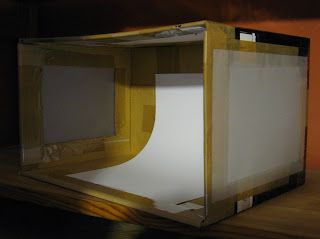 I thought it was time to improve the photos of miniatures used here so I knocked up a simple light box. There are loads of articles on how to do it if you Google for them.

I used an old cardboard box. I cut widows in the top and sides and covered them with tracing paper. This diffuses the light. The white card inside is curved and produces a continuous bottom and back surface. I suppose this took me about an hour to make.

I already have a desk lamp with a daylight bulb which I will use to light the box from above. Ideally I would also have lamps at the sides. This should provide a good environment. Improving my photography will require more study and experiment.

A very useful video from Kallistra about the right way to set up Hexon terrain. Sally demonstrates how it should be done with the utmost efficiency.

Basing choice is a major bane of planning wargame armies. Irregular Wars calls for square bases. 30mm x 30mm is suggested for 15mm figures but 40mm x 40mm (using sabots if necessary) is allowed to accommodate figures already based for other rules, e.g. DBR. As I don't already have any finished 15mm pike-and-shot era figures I'm faced with a choice.

The figures in the illustrations are all from Khurasan's excellent new Irish Renaissance range. I'm planning to publish better pictures in a future instalment.
Read more »
Posted by doctorphalanx at 16:43:00 3 comments: