I got my first chance to set up a game of Rommel on the tabletop. It was the  scenario for Operation Brevity, a limited British offensive against Axis forces in North Africa in May 1941.

Actually, it wasn't so much of a competitive game as a collaborative exploration of the rules, at least to start with. We worked together on the initial Axis deployment. My collaborator, Chris, then set up the British based on their historical deployment.

Although it wasn't my original intention for us to adopt sides, Chris effectively assumed control of the British while I started making decisions for the Axis.

In  the scenario, as in historical reality, the British make a strong showing at the beginning before German reinforcements arrive.

Some German forces are deployed on the back row while others arrive in a later turn (but we didn't get that far). The Italians can be deployed forward to  hold the objectives.

Deployment is very straightforward, but it all feels a little different if you're not used to playing many grid games.


In our very short game the British soon captured the central Italian-held objective and seriously depleted the Italian forces guarding the town. The struggle for the other Axis objective was a stalemate.

A counterattack by the German forces already on-table was only partially successful. Had the game continued I think it would have swirled around with both sides threatened by isolation. We completed three moves but didn't have time to pursue the game further. At this point the Axis line seemed very thin indeed. Although this is an introductory scenario, it's an interesting one and should repay playing with different strategies.

Reading rules is one thing: actually playing a game on the tabletop is another. I hadn't really absorbed the rules properly and we relied on the QRS, whatever I could recollect  and whatever we had to time to look up properly. We didn't get everything right (crucially we neglected to tip retreating attackers) but it was a good start. By the end I felt there probably wasn't a lot more to learn for the basic game and that when everything is learnt, the turns will be playable very quickly, leaving maximum time and energy for play rather than rule referral.

Steven Thomas' Balagan blog recently reviewed a range of Operational-level games that predated Rommel. By  his definition Rommel would not count as an Operational game because the basic unit is a company.


However, the game is very highly abstracted and certainly  feels Operational. You have to second-guess your opponent with the selection of events and tactics which are pieces of narrative on cards rather than emanating from the position of lead castings, companies are concentrated to apply pressure and combat is attritional. Fights certainly grind to a conclusion over several turns but there are no knockout blows.

My collaborator judged the game to be complicated in comparison with Sam Mustafa's Bluecher and although he considered it realistic he didn't warm to its attritional nature which he found unexciting. Each to his own.

Now for some of the physical practicalities.

1. My tabletop consisted of 1 ft square cork tiles with little Go counters at their centres to remind players this was a 6" grid. It was OK but still required a degree of mental adjustment. I really felt it would be better to have clearly defined 6" squares with edge lines and I've since ordered the Deep-Cut Studio gridded meadow mat from BigRedBat for use with my 10mm armies.

2. The unit cards don't provide the immediate visual clue given by models and can be awkward to pick up without long nails. If used as game counters they need to be based on MDF.

3. Command Post cards are, I believe, a big improvement on the Command Post sheets but can again be fiddly. This isn't just a question of size but more importantly a result of being printed on ordinary card stock. Proper playing cards are coated and glossy and slide off each other easily.

4. Tipping didn't actually lead to any ambiguity in the game but I think it might. Players naturally want to point attacking units towards their targets. Keeping them perpendicular, unless tipped, feels too much like a boardgame. In future I think I will use markers to indicate tipped.

5. In addition to the D6s used for Ops, I must remember to pack two D6 of another type for combat resolution.
Posted by doctorphalanx at 10:01:00 6 comments:

Rommel uses a 'Command Post' somewhat reminiscent of the planning board in Saga. It gradually fills up with dice to mark the events and tactics used until the whole board is optionally reset.

This is (a) an accident waiting to happen, and (b) difficult for secret selection of tactics, so some players are planning to substitute cards.

As I'd already started a database to generate unit cards, I was in the mood to develop functionality for managing CP cards as well.

This approach is also very convenient for dropping CP items you don't want or adding custom items for specific scenarios.

In each CP 'pack' I've also included blank cards so the opposing player doesn't know if you're actually selecting a tactic or not. The cards are discarded when used, unique events for the rest of the game, and others until the CP is reset.

There are, of course, other ways of generating unit and CP cards. Databases require some 'professional' knowledge and more upfront investment but soon pay off on reuse.
Posted by doctorphalanx at 14:39:00 2 comments: 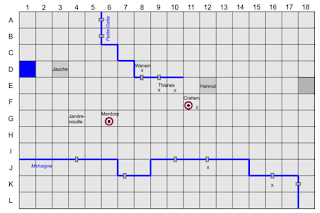 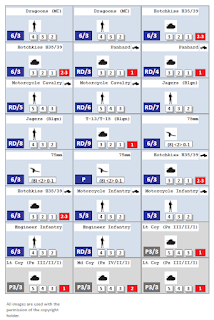 Besides the historical research and game-creation  aspects, this project has also involved resuscitation of graphic and database skills, the latter being utilised to create a set of unit cards. I don't have much free time during the day but insomnia is a great aid to productivity.
Posted by doctorphalanx at 03:04:00 3 comments: