Bad hair day for the Vikings

After playing a game of The Crescent & The Cross I was thinking about resuscitating my 25mm Vikings for Saga or even Dux Bellorum. This was an army that was literally packed away some 20 years ago and never opened since.

Anyway, on opening the boxes and picking out the polystyrene chippings used to pack them, I discovered that some of the figures had become considerably 'hairier' owing to a nasty instance of lead rot. Some looked like iron filings attracted to a magnet while others had crumbled to dust. Happily, the vast majority are in perfect condition.

As the figures were recruited from a large variety of different manufacturers I don't know which ones rotted, and as the ranges are so old it's water under Stamford Bridge in any event.

AFAICR all these figures would have been undercoated with a polyurethane varnish stained with Humbrol enamel matt black, painted in Humbrol matt enamels and then given a sealing coat of varnish.

That was my standard approach for 25mm figures in those days and I've never seen this problem with any other armies.
Posted by doctorphalanx at 08:01:00 No comments: 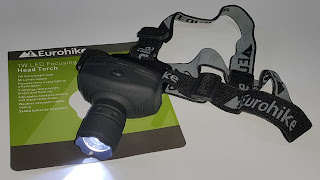 After the age of 40 painting miniatures becomes increasingly difficult because of growing long-sightedness. The need to get reading glasses, adjust glasses or use magnification will depend on the individual, but one thing we can all benefit from is good lighting.

Until now I've relied on daylight and desk lamps but I was given an LED head torch as a Christmas present and it's brilliant for literally 'spotlighting the work in hand'. This has transformed my painting life. Thank you!
Posted by doctorphalanx at 10:06:00 4 comments:

Following the Pavia refight, my next Impetus game featured 15 mm Feudal English versus Feudal Scots on a regulation 4' x 3' area. My 15 mm Ancients/Medievals are another group of armies that haven't seen the light of day for at least twenty years.

As all the figures were mine I drew up the army lists for the sake of convenience. Each army was divided into three commands. My opponent, Ian, who ended up commanding the Scots, had warned me to balance the commands. I ignored this advice but it caught up with me during the game. Each army was organised in three commands with all generals attached.

Bloody Big Battles! can be played with any scale of figure and 1" square bases are recommended, though they can be a little bigger. Although I'll be using my ceramic blocks to play BBB for the time being,  I've been giving a lot of thought to the relative merits of different scales.

I've long thought about using 2 mm figures for grand tactical games. Well painted bases and good scenery can begin to make things look like a real battle, but I wouldn't get much satisfaction from the figures or their uniforms which is the point of using 'toy soldiers' in the first place.

Langensalza is a small 'training' scenario available from the BBB Yahoo Group, and I decided to try it out using my ceramic blocks and Hexon terrain. Langensalza is interesting as the scenario is based on a paradox: the Prussians are outnumbered but obliged to attack in order to stop the Hanoverians from attacking and breaking through. This report will mean most to BBB players who are familiar with the scenario.