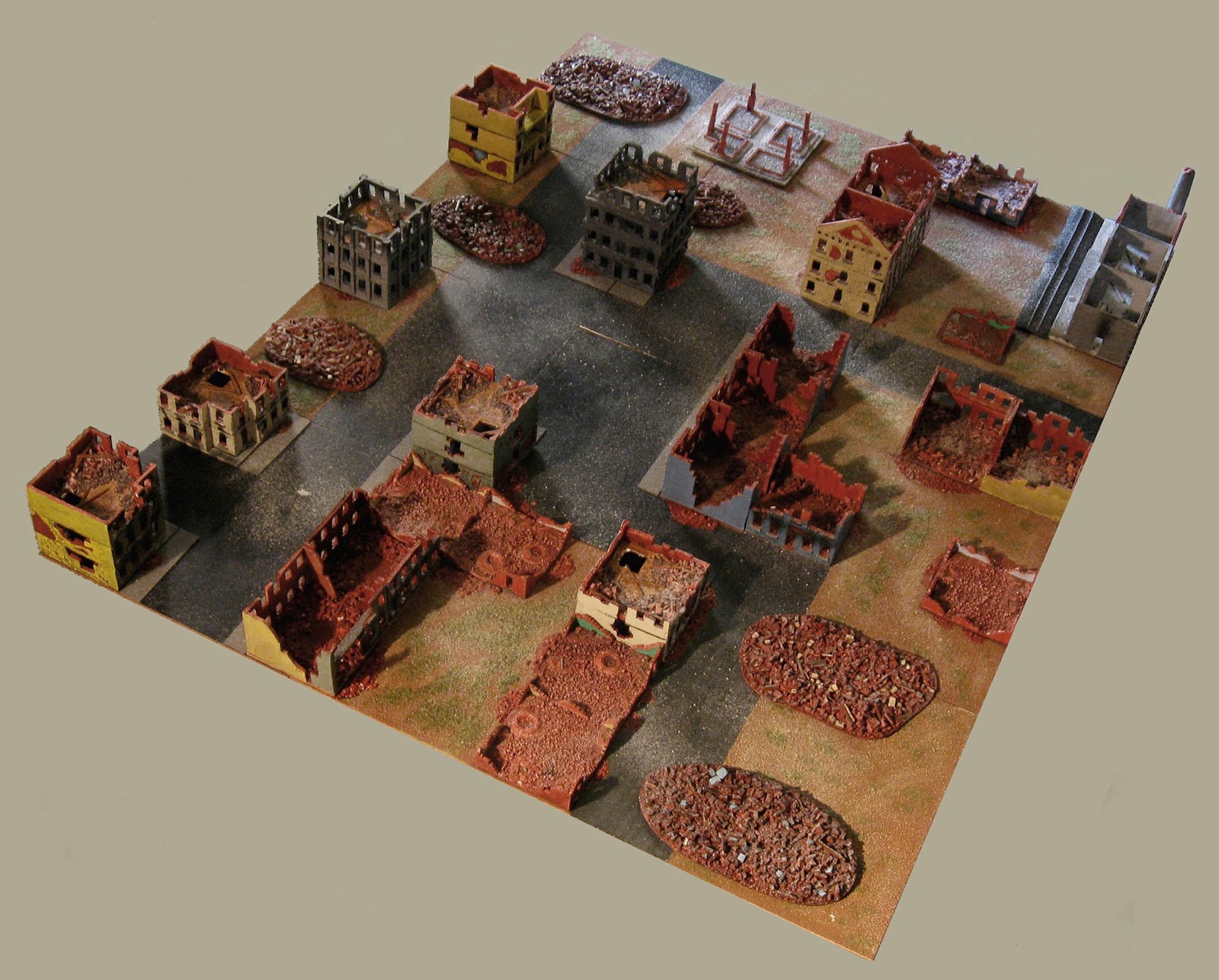 This game was originally inspired by Steven Thomas' 2 Foot City, and my thanks are also due Nikolas Lloyd for his 'nearer than' house rule (see below). My version of this urban Crossfire game has been around for some time. After going through a number of iterations, it has finally solidified into a set scenario for staging at the Cavalier show in Tonbridge, Kent, next month.

The scenario represents a German company-level attack on Soviet positions.

DEPLOYMENT
The Soviets deploy first in features 14-24 (see map below). The Germans deploy second in features 1-7, and start with the Initiative.

OBJECTIVE
The German objective is to take either (1) the L-shaped flats complex, (2) the mill complex, or (3) the factory complex (outlined in yellow on the map). The actual target is randomly and secretly assigned to the German player, who must gain uncontested occupation of the respective complex, i.e. they must be in occupation of at least one section of the complex at the end of a Soviet initiative, and the other sections of the building must be free of any Soviets. The Soviet objective is to stop this.

Each side has enough ammunition for half-an-hour of action and must withdraw if ammunition runs out. This is measured by a chess clock. If a player's flag falls, they must immediately withdraw and have lost the game.

SCENARIO/HOUSE RULES
1. Squads in a building section can Group Fire, Group Move or Crossfire only with other squads in the same building section.
2. Each single-storey module can accommodate two full-size elements (Squad/CC). One extra full-size element is allowed for each additional storey, all positioned on the top floor. (I.e. taller buildings have more capacity and act as strongholds but all buildings are otherwise treated as single-storey for play purposes). No limit on PCs/Observers.
3. All contiguous building sections constitute Building Complexes.
4. Commissar rule: Soviet CC adds +1 when rallying squads but if the rally fails, Pinned become Suppressed and Suppressed become Killed.
5. Nearer than rule. Squads behind a rubble area may claim it as cover if the edge of the area is closer to them than the opposite edge is to the shooters.
6. Suppressed Squads may be ignored as a target priority.
7. Setting up an HMG on a given building face (or changing the face) is subject to Reactive Fire. (An HMG must elect to set up and will automatically succeed regardless of being pinned or suppressed as a result.)

SOVIETS
CC/PCs +1 in close combat only. CC +1 for Rallying subject to Commissar rule.

Note: CC acts as FOO for one of the mortar batteries.