My friend Ian and I played the Gettysburg scenario as we were keen to see how BBB played for the American Civil War and because I have always had a particular interest in this iconic battle. As usual I took a lot of photos during the game and will post a blow by blow photo report in due course. However, such AARs take a long time to write so I’m starting with an overview which is arguably more interesting.

The game is divided into three days. In real time we took about ten hours (with breaks) getting through deployment, 8 full game turns, 2 night intervals, and an assessment of turn 9 probabilities. We could have gone quicker if we knew the rules better and played them more often.

6mm vs 10mm and a theory about light

Regular readers will know I have quite settled (though not unusual) scale preferences. These are 28mm for skirmish, 15mm for small armies especially if they are predominantly infantry (e.g. for games like Crossfire and Irregular Wars) and 10mm or smaller for any mass armies. For at least two future projects (Bloody Big Battles! and Dux Bellorum), however, I have been torn between 6mm and 10mm.

I could say that further light was shed on this dilemma during my recent visit to the Salute 2016 show, but it was rather the lack of light and its effects that struck me. Now, the lighting at Salute is not good, but it it is also probably not untypical of many wargaming clubs. Anyway, in search of the one true scale, I had a particular interest in appraising certain 6mm and 10mm figure ranges.

On the Baccus stall I was struck by the dioramic excellence of Peter Berry's 60mm x 60mm American Civil War bases. I then had a closer look at the painted figures on the stand. Now I know that the Baccus figures are very well detailed, but under these conditions they just seemed 'dark' and silhouetted against their bases.

I then visited the Pendraken stall just around the corner where a unit of French Franco-Prussian War figures were on display.  These did not have a dioramic appeal. To achieve something similar would probably have required an 80mm x 80mm base. But they did not seem dark - they were definitely in full colour.

This was not a controlled scientific experiment, but is it possible that the greater size of 10mm figures, marginal though it may be, makes a crucial difference to reflecting light and thus showing colour?

To be honest, a lot of my own 10mm and even 15mm figures are too dark. When painting future armies I really must make more effort to use lighter/brighter colours.

If I didn't go to Salute I might miss something, but it's far less of interest to me than it once was.  This year's visit was even more routine than usual. I picked up some more Hexon from Kallistra and had a chat about some possible, though probably unlikely, Hexon extensions. I bought a few more trees from S&A Scenics. I got some ready-painted Epsilon buildings from Pendraken. And I bought a few steel bases which I only mention for completeness. I could have done all that online.

Other than these more-or-less planned purchases, nothing new caught my attention. I might have made some impulse purchases on the bring-and-buy stand, but, disappointingly, there wasn't one. Good job I didn't take anything to sell!  Of course, I do have a wargaming shopping list, but most of the things on it were not available at Salute.

Unusually, I also walked round the games. I don't usually bother, partly because I find it difficult to concentrate on them in the oppressive and disorientating Excel environment, and otherwise because I usually end up having a few drinks with old friends. That can also end in disorientation but it's more pleasurable.

At a show like Salute it isn't really the game that counts but the visual impact it makes, and in that regard my vote would go to the Battle of Wilhelmsthal which I believe was the work of Bill Gaskin and friends. As good as the figures undoubtedly were, it was the architectural models which grabbed my attention. It was absolutely superb work depicting a very different world from the gargantuan hangar which houses Salute.

Could Salute be better? Yes, it could be somewhere else.
Posted by doctorphalanx at 17:47:00 23 comments:

I was just about to place an order for some 6mm Franco-Prussian War figures when I wavered at the prospect of buying and painting almost 50 packs of figures, and that would be just to do the battles of the Imperial period. In the meantime, the use of the blocks, Hexon and wooden toy village buildings has received a lot of compliments. I've therefore decided to put any figure orders on hold for the time being.

I began with block labels showing standard  NATO symbols. They don't have the 'Xs' and 'Is' used to denote level (e.g. 'II' for a Battalion) because while in one game the blocks might represent Platoons, in another they might represent Divisions or anything in between. I soon realised that it would often be important to indicate facing, so I later added triangular arrows.

Despite spending a lot of time helping to playtest the current edition of Irregular Wars, I haven't played it much since because I was waiting to finish my first pair of armies - 15mm Colonial Portuguese and Dutch. The bases still need texturing etc, but having stuck the figures to the bases, the armies are now usable. Unfortunately, I realised at this point that I had either miscalculated the figures I needed or the army lists had changed. Anyway, I had to make up a couple of new bases which now need to be painted from scratch. Hence the silver-coloured unit in the photos. 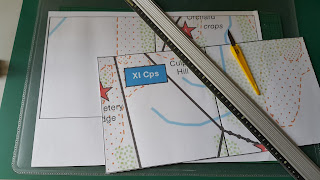 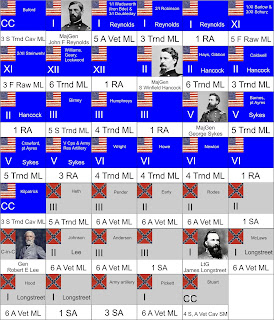 I've also tried to make the unit ID counters more distinctive and attractive. It doesn't matter so much when using figures, but all block armies look the same! This gives them a bit more character.