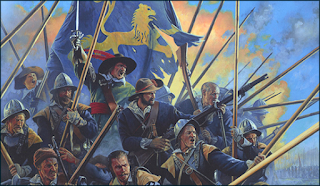 In my first wargaming career as an adult - from the late 70s to the early 90s - WRG Ancients was the game I played more than any other, and I progressed through various rule editions, scales and rebasing experiences. When I returned to wargaming sometime after 2000 I couldn't go back to the mental contortions of Barkerese and took up other periods and games like Crossfire.

Over the intervening years I played a few games of Ancients with various different rule sets including DBA, which I did enjoy,  but I didn’t commit to any of them. Just recently a couple of friends at my wargames club, Bernard and Chris, organised a game of L'Art de la Guerre in which two other players - James and myself - enjoyed minor roles. None of us had played the game before, and my only introduction had been looking at the rules for an hour earlier in the day.

The game featured Sassanids versus Byzantines. In order to speed things up a small amount of scenery was arbitrarily placed on the table, but otherwise I think we followed the proper procedures. The game is said to be playable to a conclusion in two-and-a-half hours. We managed four moves each which for a first game seemed reasonable.

It's early days but all four players were positive about the experience. The photos show the course of the game as far as it went.

The Sassanid and Byzantine armies from the Byzantine side.

The armies skirmish on the left and in the centre.

My command gets stuck in with mixed results.

The Byzantine centre weakens, but my light cavalry catch the Sassanid left flank.


ADLG is now strongly established so I'll just comment on a few aspects that struck me. The standard game is fought with very convenient sized armies in a reasonably convenient area. The army lists are clear and strike a good balance between simplicity and complexity. They are also realistic and avoid the obscure gimmicks that are a feature if other rule sets, and which competitive players latch onto if it brings them game advantages.

While DBA is a game of sudden outcomes in which units die or survive unscathed, ADLG units suffer cumulative damage before destruction. This introduces a significant element of attrition, and seems to invite the need for intervention by reserves. Once the troops are locked in combat there is otherwise not a great deal of use for Pips.

Of the Ancient games I've played in recent years - DBA, Impetus and Sword and Spear, ADLG seems to be the most promising for my tastes, so I've set about reorganising my 15mm Ancient and Medieval armies and will rebase and supplement them where necessary. It will be good to get these armies out of their long retirement.

From Easter until at least the end of August, wargaming takes a backseat due to other interests and commitments. I try to play a few games if I can piggyback on the efforts of others, but it’s not a time for being proactive. This year has been particularly busy and I've not got back into wargaming at all, hence the lack of posts to this blog.

In the first quarter, however, I did make some progress. I now have British, Zulu, Pathan and Egyptian forces for The Men Who Would Be Kings. The Pathans and Egyptians haven’t yet been used, but I’ve staged two Zulu War games and have now added a unit of Natal Native Contingent. For Lion Rampant I not only have the Dark Age and Late Medieval armies but have also begun to collect figures for a Medieval Anglo-Irish project.

I haven’t posted anything about Dragon Rampant but I had some ideas for armies and have played a couple of games kindly set up by my friend Ian. I started to write some posts but they are months old now so I don't know if I'll return to them.

I also added to my collection of 1/600 ACW ironclads for Hammerin’ Iron, a long-term intention which had been awaiting the appearance of ready-painted models on eBay.

On the home front I hit and overcame (for now) a storage crisis by disposing of unused figures and scenery, with a lot more heading for eBay when I can find the time to organise it. I also came to terms with my lead mountain by reducing my to-do list to current interests only. Anything not on the list may also become a candidate for disposal.

Buying second-hand, ready-painted armies overcame my lack of painting time but is in danger of bringing me back to the brink on the storage front. Buying is easier than selling but I will have to find the time and energy to ensure that accumulation is balanced by disposal.

As and when my interest in wargaming rekindles, it would be sensible to use some of my existing armies or even to paint some of the figures from the lead mountain, but where's the fun in that? This is wargaming. I need a new project in order to rekindle my interest! I've been looking at a couple of options.

First up was the French and Indian War using 28mm figures and the forthcoming Rebels and Patriots rules, another set from the Rampant stable, but as Ian was inspired to take the initiative on that one I've now moved on to the idea of a skirmish game using 28mm Border Reivers. Because of the typically (though not exclusively) small scale of Reiver activity, this would be a 'true' skirmish game in which figures operated individually rather than in units, and would therefore be played with a relatively limited number of figures. As such the project is potentially more realiseable than one requiring mass armies.

I'm currently looking at rules and will be trying them out with tokens or substitutes in order to make sure they have enough player appeal, and to avoid the debacle that I had with Rommel which failed to gain local traction.
Posted by doctorphalanx at 04:07:00 4 comments: