I bought some 15mm Two Dragons Samurai years ago to do a DBR army. There weren't enough figures and they've sat in a box ever since. But then I realised that with a few extras they would make an army for Irregular Wars. So I bought the extras and an Ikko-Ikki army to oppose them.

The Two Dragons figures are now sold through the Minifigs website and dispatched by Caliver Books. I'm very pleased to see that after all these years the castings are still excellent quality.

The only thing I'm now lacking is a portable shrine for the Ikko-Ikki which nobody seems to make in 15mm but which should be easy enough to scratch-build.
Posted by doctorphalanx at 04:45:00 2 comments:

I had a very productive day at Reading Warfare last Saturday. I spent the morning accumulating scatter scenery for my Gruntz 15mm Sci-Fi skirmish project and some 10mm houses suitable for my Chinese Warlord Era Red Actions project. In the afternoon I was privileged to participate in a game of Bloody Big Battles! organised by its author Chris Pringle and his comrades from the Oxford Wargames Society.

I'll write in more detail about my Gruntz scenery plans another time, but this shows the sort of thing I'm collecting or making for my grungy, post-Apocalyptic environment. Scatter scenery will be either low enough to provide cover or high enough to block line of sight.

The houses come from two sources. The painted ones are Epsilon buildings from Pendraken while the remainder are from the Timecast Vietnam range. The Epsilon buildings are a slightly larger interpretation of 10mm but I think they will work well enough together. I was a bit unsure whether Vietnamese buildings would do for China, but I did a lot of Googling and am satisfied that similar buildings could be found in China.

I arrived at Oxford's Bloody Big Battles! table at about 2pm, just as their second game of the Loigny/Poupry 1870 scenario was about to start. I was keen to play with the experts and was delighted to be given command of the I Bavarian Korps on the German right.

I was tempted to take advantage of the towns near the enemy edge of the table, but this forward defence was overwhelmed by the superior French numbers. I then fell back in line with the objective I was defending (Loigny). Hanging on to this was very touch-and-go the whole afternoon, but I just managed to do so. I was a bit rusty on the rules but got a lot of guidance, including tactical advice. After a while I began to make my own decisions, not that these always proved to be a good idea.

I didn't have much chance to take in what was happening on the German left or centre but did witness the final German assault on the left wing which, in the last (tenth) turn of the scenario, regained Poupry. This was very exciting to see and put all three objectives firmly in German hands. The game was over by 5pm, so it had taken four plus people nearly three hours of playing. Once again I felt I had relived history or an alternative history.

I also had a chat with Chris about doing the Urabi Revolt (Tel-el-Kebir) with BBB. I have been thinking about that for quite a long time because of an ancestral connection (British side) but Chris pointed out that it was a bit of a walkover and I realised that it wouldn't make for a very balanced game. I am thus able to cross something off my to-do list!

I really enjoyed the afternoon and must make the effort to play BBB more. I will probably send off for some sample Baccus 6mm Franco-Prussian War figures, decide how I am actually going to base them and then put in a full order.
Posted by doctorphalanx at 09:33:00 6 comments:

Flight and other bases for Gruntz 15mm

I usually base figures on a combination of steel and MDF, the former for storage and transportation in magnetic-lined boxes and the latter for thickness so that players are encouraged to handle the bases rather than the figures.

With individual figures and models it is inevitable that players will pick them up by the figure/model rather than by the  base, but this isn't too much of a problem with the Sci-Fi figures as they are generally quite robust and don't have fragile bits like bayonets and flag poles. Accordingly, there isn't much point in doing thick bases so I'm just putting the infantry on coins and the vehicles directly onto steel.

Following the use of the coins I decided to use round bases for the mecha and grav vehicles, and rectangular bases omly for tracked and wheeled vehicles. In all cases these will be of minimum size and unobtrusive.

The grav bikes, drones, VTOLs and grav AFVs presented the most novel challenge as they are not like anything I've had to cope with before. Grav vehicles need to be off the ground but no more than necessary.

This is the blow-by-blow account in photos of the BBB! Gettysburg game which I first reported on here. It was difficult to recall all the detail even directly after the game, and harder still at this remove in time. But if you study the photos you should be able to follow the main flow of the battle.

Unfortunately, it's a little difficult to tell the two sides apart in the photos. It may be clearer if you click on the photos to enlarge them and look for the ID markers which are predominantly grey or blue. The large numbers are turn indicators for the benefit of the camera. 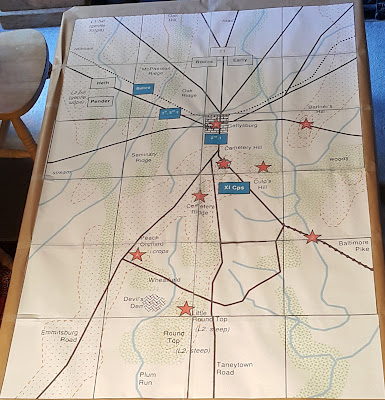 The battle was fought on a blown-up version of the map. The map squares are only 8" square, but the figure bases are only 20mm square (instead of 25mm) so the table and the units are more-or-less in proportion. 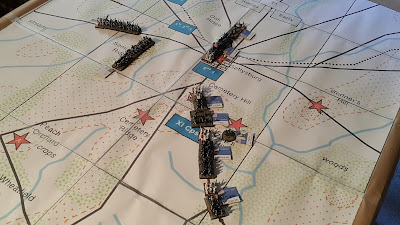 Deployment. Union troops are deployed around Gettysburg or moving north-west towards Gettysburg up the Baltimore Pike. Two Confederate units are shown in the north-east moving south to turn the Union left flank and threaten the Union supply line. 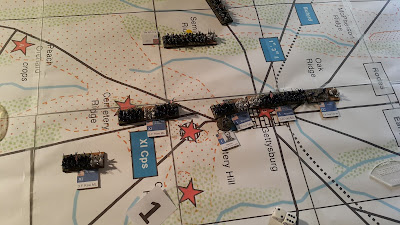 Union troops (nearest) form line. As the Union commander I am feeling relatively secure, but that's mainly because I hadn't actually read the scenario in detail...