My gaming, painting and blogging activity contracted further in 2017 but this was due mainly to other pressures rather than loss of interest.

My penultimate game of the year was a cowboy skirmish game kindly staged by my friend Ian using Games Workshop's old but solid Legends of the Old West. The bad guys (me) were holed up in in a livery stable. Given equal points I was expecting to blow away the lawmen as they approached over open ground, but this was not to be. At one point I decided to come out, guns blazing, but I failed to hit anything and then got well and truly gunned down.

Now for the overall tally. I played 2 games of Command & Colors Ancients, 2 games of X-Wing,  1 game of Battles of Napoleon, 1 game of Crossfire (early Great War), several 'training' games for Great War Spearhead, 4 games of Test of Honour, 1 exploratory run-through of Rommel, and 1 game of Legends of the Old West.

On the modelling front I started a couple of 3mm armies for Rommel and accumulated some 28mm Anglo-Zulu War figures for The Men Who Would Be Kings which I am currently rebasing.

My next post will be in the new year and will outline my likely pursuits in 2018.
Posted by doctorphalanx at 17:58:00 4 comments:

Unit cards for The Men Who Would Be Kings 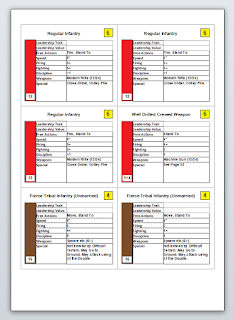 While playing the Samurai skirmish game, Test of Honour, I was struck by how discrete unit cards are much better than rosters for reading and absorbing unit data.

I had also seen the excellent unit cards for The Men Who Would Be Kings on the Shed Wars blog. After struggling with Excel and Word, I once again decided to create an Access database. The cards (a 'labels' report) were much easier to configure and I can quickly add new unit types to the underlying table.

The cards aren't as nice as the Shed Wars ones, but I could improve on them later by adding images. I'm indebted to Shed Wars for showing me the way.
Posted by doctorphalanx at 22:34:00 No comments:

Labels: 19th Century, Anglo-Zulu War, Colonial, The Men Who Would Be Kings

Rebasing 28mm figures for The Men Who Would Be Kings

So here I am with a growing collection of second-hand Zulu War figures from different sources, all based individually but not in the same way. Rebasing is a priority, mainly so they can be safely stored, transported and used, but also to give the figures a more common look (once textured and grassed).

First step is to remove the existing bases. Card bases are easily weakened by standing them in water, but other bases have been an absolute pain to get off.


The new bases are simply 2p coins. These cost, well, 2p, and are cheaper than steel discs or even MDF. 'Copper' coins were originally bronze but since 1992 they have been copper-coated steel and are attracted to the magnetic plastic sheets which I use to line my storage containers - A4 Really Useful Boxes.

At some point, of course, I will be adding filler, sand and foliage, but the figures are ready to use. All I need now is more of them.
Posted by doctorphalanx at 23:06:00 4 comments: