To the Strongest! - first game 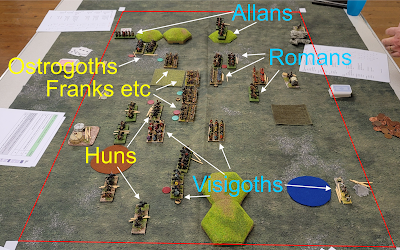 I put on and umpired a game of To the Strongest! at my local wargames club. Bernard commanded the Huns and allies (left) while Ian had the Romans and allies (right).The Allans flanked the Ostrogoths (top) and the Visigoths pushed back the Huns (bottom). In the centre the Romans and their Frankish and other Germanic opponents traded blows fairly evenly.I had already gone through some moves in a solo game a few days before, so I had a reasonable grasp of how the game is played. I don't think we forgot anything or made any mistakes. The players were quick to pick up the flow.Most importantly my wargaming comrades enjoyed playing and have a positive view of the game, endorsing my own optimism and paving the way to play the game in the future.

The photo above shows the situation at the end of five game turns. The figures are all 15mm from my collection. The Allans are proxies.

The game didn't reach a decision but the Huns were under pressure.

I'll be sorting out some Feudal era armies for the next game and we'll play with slightly fewer units and just two commands a side while we're becoming more familiar with the rules.

As a grid game To the Strongest! doesn’t stipulate any particular basing requirements, and as my 15mm Ancients and Medievals are already based for DBx, it's just a question of combining them into larger units. The figures all have magnetic sheet underneath their bases so the obvious solution was to put the DBx elements onto steel sabots.

Retaining the original bases means they will also remain usable for other rules. I had already gone down this route to some extent in order to play Impetus so I just needed to get more steel bases of various depths.

After some thought and experiment I eventually decided on one sabot per unit and I am now absolutely convinced this was the best choice. If I ever play some other game requiring different basing, I'll just get more sabots of appropriate size.

As I usually have to transport my armies on foot, I'm very keen on secure storage, so the sabots (with the figures on them) will in turn be placed into boxes lined with magnetic sheet. I've yet to find out just how well the figures stay on the sabots, but the sabots adhere strongly to the boxes.

In fact, the attraction is so strong that I've had to put paper ‘ribbons’ under the bases so I can pull the sabots out without scattering the figures. Maybe there’s a slicker solution but this does seem to work.

As mentioned above, I used to put magnetic sheet under the bases but it's much less trouble to snip off bits of magnetic tape. The tape is just a little narrower than the DBx base depths, so 12.5 mm for 15mm, 15mm for 20mm and 25mm for 30mm.

I currently get MDF bases and steel sabots from Products for Wargamers, magnetic tape from Magnetic Displays, and magnetic sheet from TinyTinTroops.