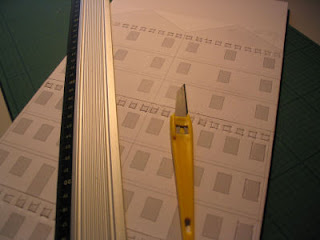 These pictures show the cityscape as originally envisaged. Unfortunately, placing figures within the mult-storey buildings proved to be fiddly, confusing (the bases got lost) and complex (house rules were needed). At first I separated the floors and used all the buildings as single-storey, but this didn't look right. Finally, I stuck the buildings back together.

My cityscape now consists of rubble areas interspersed with buildings, and I will add some pictures of these in a later post. Bases are placed only on the top floors. A single-storey building accommodates two squads with an extra squad allowed for each extra storey. This allows the buildings with more floors to be occupied by stronger forces. Gameplay is otherwise exactly as in the basic rules.