10mm armies for 'To the Strongest!' 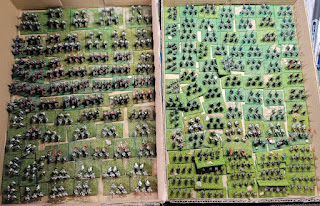 I've had to deal with some domestic redevelopment work and have also been preoccupied with  following events in Ukraine, but I did find time to fit in a few more games of To the Strongest!.

I also inherited a 10mm Norman army with enough figures  to split into two TtS! armies (Anglo-Norman and Norman) based on the Battle of Tinchebrai (1106), thus plugging another historical gap in my collection of medievals.

The basing scheme and base sizes are rather random so I've decided to rebase them all. There are also quite a few unarmoured figures which have been painted as armoured so I'll also be dabbing a little paint on them to restore the look of textiles.

Once reorganised and rebased on 60mm wide bases the armies will fit a 75mm grid and thus a very compact 3' x 2' TtS! playing area.
Posted by doctorphalanx at 09:41:00 No comments: