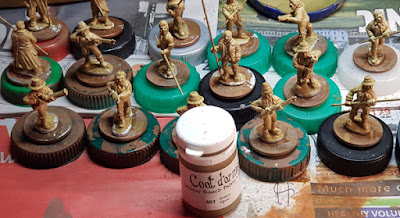 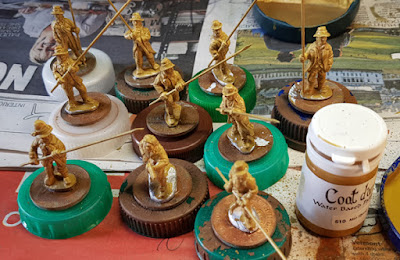 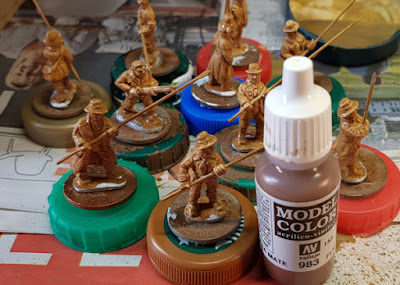 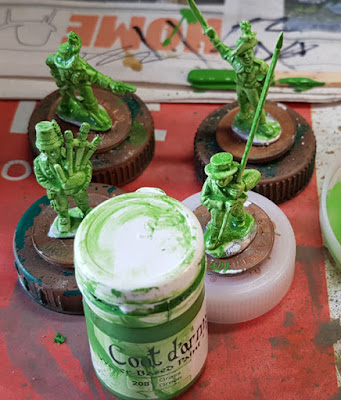 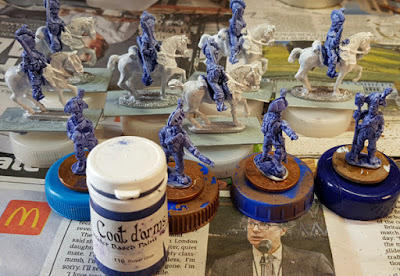 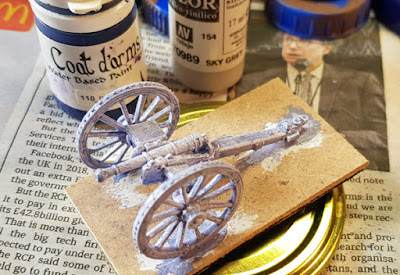 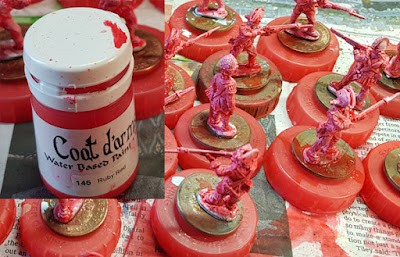 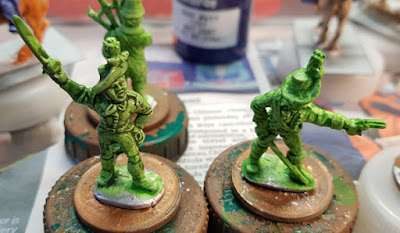 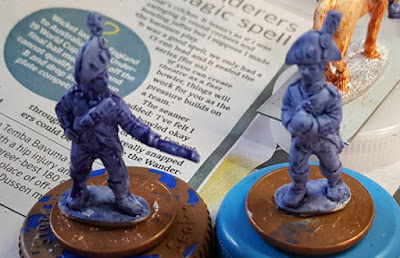 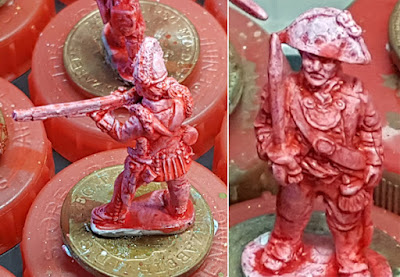 These secondary washes on the figures in uniform coats pre-empt the role of the final stain but the figures do look better. Having to do a second wash is contrary to my central principle of economy of effort but it's still quicker and easier than a dark to light approach using two or three tones solidly applied.
Posted by doctorphalanx at 09:10:00 2 comments:

Reflection No 1: Getting in Sync

I may yet have some 'rants' to deliver, but the idea of a rant is too  aggressive for many of my thoughts, so I'm pitching this as a 'reflection'.

Like most wargamers, I'm a serial obsessionalist. I'm happiest when concentrating on one thing and totally submerging myself in it, but then I'm also easily bored and likely to flit to something else! Finding the right balance is a perpetual challenge.

This year I've planned for a limited set of areas and a close integration between what I'm painting and what I'm playing. As I'm basing-before-painting and using-while-painting I'm well placed to do this. (I'm committed to adding more paint before an army is used again so I have to slip the figures on and off painting bases, but that's no great burden.)

I typically play two games a month so the idea is to spend the preceding fortnight working on the armies I intend to use in my next game. Devotion to theme doesn't stop at modelling or swatting up on rules, but may extend to what I read or watch or listen to.This will not only 'feel right' but give me a big incentive actually to do some painting. At the moment I'm focusing on my 1798 figures and the strategy is working.

This approach is much better than the one that involves months of painting before you can play a game with the inevitable loss of interest before an army is finished. I have the semi-painted lead mountain to prove it.

It's a little unusual to write about process rather than models or games, but it's actually fundamental to the whole pursuit.
Posted by doctorphalanx at 09:06:00 6 comments:

Chain of Command: My 1944 Ardennes Platoons and Supports

These are my 28mm 1944 Ardennes Campaign German Volksgrenadier and US Army platoons for Chain of Command.

There is also an HQ team of three men armed with KARs and Rifle-Grenades. At this late stage of the war, following losses on the Eastern Front, there is only one Senior Leader but another can be purchased from the Supports List and looks like a must.

Other supports shown in the photo include a Pak 40 anti-tank gun (centre), a tripod-mounted HMG, Panzerschreck teams, and snipers. I also have a Black Tree Infantry Gun on order, but am having difficulties getting a response from the company.

The models are all metal apart from the Pak 40 which is a resin piece from Blitzkrieg Miniatures.

The US platoon has three Rifle Squads. Each squad has a Junior Leader (square base), a Rifle Team and two BAR teams. The second BAR is actually a 1-point Support upgrade. I will probably field each Squad as two teams with a BAR in each.

The figures with oblong bases are Senior Leaders. To their right is a Bazooka Team. The Supports include an anti-tank gun, mortar, snipers, a 32mm Browning (needs some additional figures), some more Bazooka Teams and Medical Orderlies. I don't know how many of these extras I'll atually need. They're just the figures I bought twelve years ago.

The original figures were Artisan and Bolt Action but I've recently added a few Empress Miniatures and others. Crewed weapons in CoC typically require 4-5 crew which is more than manufactureres usually supply. I'm therefore always on the lookout for suitable extras, e.g. ammo carriers.

Using 1/50 (or 1/48) vehicles instead of 1/56 vehicles is controversial. Readers will note that the figures are mounted on rather high bases. This is all to do with the AFVs, an issue I’ll be addressing in another post.
Posted by doctorphalanx at 08:26:00 4 comments:

My 1798 Irish Rebellion companies for 'Rebels and Patriots'

These are my 28mm 1798 Irish Rebellion companies for Rebels and Patriots. I’ve been buying them from North Star using my monthly Wargames Illustrated discount. All the figures are Trent Miniatures. They have great character and required only minimal cleaning up.


There are no silly cast pikes but no open hands either, so the hands had to be drilled. I started with a pin vice but the metal was quite hard so I dug out my old modelling drill and upgraded the power unit from 9v to 12v.

It’s some time since I’ve used this so I had to decide on technique:

1. Start the hole with a pin vice hand drill which is more controllable than the electric drill. Once the hole is started you can get a purchase with the latter. If going through two hands, start each one with the pin vice.

2. Don’t just drill. It will jam. Keep pulling it out and pushing it back in again. This doesn't seem to happen with the pin vice.

3. Avoid letting the drill slip under a finger nail - it's uncomfortable and may cause delay.

The figures came with sharp wire pikes. I shortened these to 60mm to represent Irish half-pikes.

The Crown troops required a lot less work. Many of the Militia (and Rebels) came with separate heads. This provides good variation for the Rebels but less so for the Militia. The Militia heads can be angled a little differently, but only up to a point.
Posted by doctorphalanx at 11:01:00 4 comments: