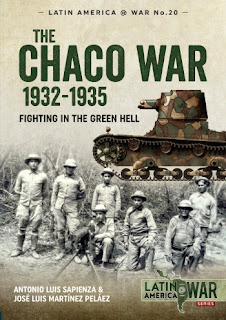 I'm not actually planning anything new just at the moment, but this is an area of on-going interest. My historical education at school was very Anglo-centric with some extension into Continental Europe and North America, and last century wargaming followed a similar pattern. Being able to branch out into the history of the other Americas is refreshing, as is the prospect of modelling their armies and gaming their wars.

Anyway, on to the specifics.

Firstly, I bought another book on the Chaco War - The Chaco War 1932-1935 - by Antonio Luis Sapienza and José Luis Martínez Peláez published by Helion. Helion have a prodigious output. They also overwhelm you with marketing emails which I was about to cancel when I saw this title. The book is nicely illustrated with contemporary photos and some coloured illustrations, and is a worthwhile addition to my collection.

I've taken an interest in the Chaco since Khurasan launched their 15mm range. There are also plenty of vehicles available in that scale. I own that prior to that I'd never heard of it. I like the Chaco War because it's offbeat and obscure, and I'm particularly attracted by the 'quirky' interwar tankettes, but these were used in such small numbers that I could really only justify their use in a skirmish-level game.

Here I think the most promising option might be Chain of Command as this would allow for tanks and all sorts of other assets - HMGs, mortars, field guns, trucks etc - all fielded in penny packets. Using CoC for the Chaco was discussed here.

For those seriously interested, a great collection of links to Chaco War resources can be found here.

Secondly, I note Peter Pig has launched a range of 15mm figures for the Mexican Revolution. This is another area in which I've had a long-term interest. Here I would be inclined to adapt Red Actions or something on that scale, i.e. companies of say 4 bases with multiple figures on each. This would be a higher level game and require more figures.

For 'mass armies' I remain more inclined to 10mm, but there's no sign of that happening and 15mm is at least a step in the right direction. I'll stop there. I'm not hitting any 'Buy Now' buttons. Well, not yet, anyway.