The excellent Crossfire games  put on at the recent SELWG show by Martin Groat, Steven Thomas and friends reinvigorated my interest in wargaming in general and CF in particular.

Although my main immediate CF project is the 'Crossfiregrad' scenery makeover  (more anon), I thought I'd give my Normandy game an outing. As it happened two new club members fancied giving it a go, so we had two teams of two, each consisting of novice and veteran. CF is essentially a 2-player game, but we are used to taking a 'committee approach'. 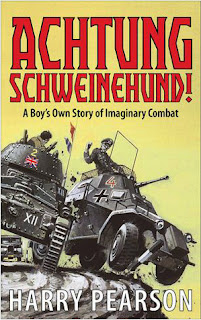 
The book doesn't purport to be a comprehensive history of wargaming but I learnt things I didn't know and was reminded of things I'd forgotten. The author is rather harsh on fantasy gamers and LARPists, but being of a certain age myself I can appreciate his frustration at the way historical gaming has been crushed by the fantasy juggernaut.