When it came to adding detail to these 6mm Thirty Years War figures, I had to think long and hard about the painting sequence. After horse flesh the most prominent features are hats and other headgear, but these are easy to access and best left till later. There is, therefore, some tension between wanting to cover the most prominent features and needing to paint the more awkward areas first.

My friend Ian had already established to my satisfaction that it wasn't worth painting hands on 6mm figures. I thought I might take this a stage further and dodge painting faces. As an experiment I painted - well, dabbed - faces on a couple of blocks as as experiment and then placed these at various 'tabletop' distances to see what could actually be seen.

At a distance the faces did show as specs of lightness, but close up they didn't show because with the higher viewing angle the faces were obscured by the broad-brimmed hats. How ironic!

Anyway, I decided I would paint faces where I could. The figures fell into three categories:

Since last Monday 'social distancing' has restricted outdoor activity to walks with the dog and provided an unprecedented opportunity for painting. Last month was 1798, this month it's the Thirty Years War.

I've now started to paint the actual figures, but rather than show you that straight away I'd like you to look at the picture (right) of my 10mm American Civil War figures.

This photo was taken during a game and shows what figure detail is actually visible. In fact, the photo is a bit of a close-up so please sit back.

What you can see is little more than the ground around the figures and  their hats. Some other bits do show up but only if they are very light and contrast with the dark brown. For my 6mm TYW figure blocks I am taking this lesson further by committing myself to painting only the bits that will show up.

The main purpose of adding any further paint is not to indulge the individual figures as would be the case with larger scales and other approaches, but just to contrast with and lighten each figure block as a whole.

The other thing to point out is that there is no preconceived end point. I will add paint/detail only until the blocks 'look painted' from a distance. I must also keep in mind that 6mm figures require much lighter and brighter colours in any event, and this is particularly so with the dark brown background approach.

Now let's look at some 6mm TYW figures. I'm prioritising the horses because after the ground the horses represent the largest and most significant area of paint.


Without making it too obvious, I thought I'd also use horse colours to further distinguish the three types of horse, i.e. Cuirassiers, (Swedish) Horsemen and Arquebusiers. The photo above shows the Swedish Horse with some Chestnuts added. This was inspired by the Swedish folk art Dala horse toys.

The Cuirassiers will have a lot of dark armour so I decided to paint them in light colours (Greys, Light Bays) for contrast. The Arquebusiers would be fairly colourful so they were to retain the basic Charred Brown coat representing Dark Bays.This plan was somewhat modified.


The Coat d'Arms horse tone colours are all a bit on the dark side and need lightening for this particular project. Simply adding white is not necessarily the answer. I should research this question properly but the quickest solution is to imagine what a lighter version would look like and then pick a ready-made colour that matches that perception.


All the horseflesh is now picked out but the blocks still look too dark. I am thus relying on coats, armour and headgear to add further brightness.

On the plus side I should point out that at this scale and using this overall technique, each individual horse needed only one colour. Apart from the flank figures, the front rank required only head, front legs and the top of the back to be painted. The rear rank required paint only on the head and hind-quarters.

This was very economical in terms of time and effort, though I do confess that at my age it's quite difficult to see the detail on such small figures and this has made me wonder whether I should do another 6mm army. I do have a magnifying glass...perhaps I should try to use it.
Posted by doctorphalanx at 17:38:00 4 comments: 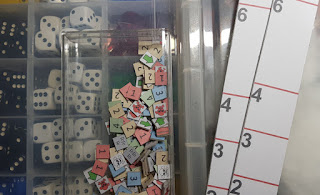 I was planning to play Tilly’s Very Bad Day for the first time later this month, but that prospect has receded into the distant future thanks to the rapid spread of Covid-19 and the impending great lockdown. Most people seem to have already gone into voluntary isolation here in the UK. Ticking one of the vulnerable boxes (age) I have also begun to become more cautious.

Anyway, remaining calm and carrying on, I've made a checklist of things to take. Simon Jones has a great scheme for organising playing aids but I haven’t got round to that yet.

The 6mm figure bases are currently being painted and will need to be stripped from their painting bases if they are not finished, but what else will I actually need?

Mat. I'm planning a small game initially. A 3' mat would be ideal for 60mm base frontages but the nearest I currently have is 4' square. I have, however, ordered a 3' one and it should be here long before the end of the Coronavirus crisis.

Scenery. Little of my scenery conforms exactly to the measurements for Small, Medium (the default) and Large pieces as defined in the rules, but I think they are near enough. I have a BUA, hill, woods, an enclosed field, physically flat fields masquerading as fields in season, areas of rough ground, felt templates and trees for woods, streams, roads and, should I care to deploy it, a river.

Measures. I've made some card rulers going up to 8 TUM (240mm in my case) which cover movement and small-arms shooting. As artillery range is unlimited, tape measures don't seem to be needed.

Cardboard Markers. Artwork is very usefully provided in the rules.

Cotton Wool to show units that have fired/moved. Almost forgot that.

Dice. At least three different colours required. 6 of each for each player should cover it.

QRS. None as yet. I'll get a better idea if one would be useful after playing.

Perhaps a 'what-you-need-to-play' section would be useful in the rules themselves.
Posted by doctorphalanx at 01:32:00 8 comments:

This was a first outing for my part-painted 1798 Irish Rebellion forces. I improvised a variant of Scenario A: First Clash At Lament Ridge which I called Capture the Plans:

An informer has alerted Government forces that secret plans for a French invasion are buried under a cottage floor. Players gain 3 Honour if they are occupying the cottage with an infantry unit at game end. Game is at least 10 turns. Thereafter throw D6 at beginning of each turn. If D6 >= 4, that is the last turn. Use character traits for Captains. Deploy in 9" zones one unit at a time starting with the Defender. Attacker activates first in each game turn.

The scenery needed careful definition:
I positioned the cottage nearer to the Rebel start line because I feared they would be shot to pieces. Things turned out rather differently.

The Companies were as follows:

I commanded the Government forces while Bernard and Chris took control of the United Irishmen. Sometimes it’s an advantage not to have a collective command, but in the event my combined opponents played much better than I did. The Rebel Captain was with one of the pike units. I placed mine with the Yeomanry.

Crown Forces: Line, Lights, Grenadiers, Gun, Line and Yeomen Cavalry. The cannon had little potential for fields of fire that would not be blocked by my own advance so I placed it on the road. Rebels: Pike-and-shot units as shown. Shelmaliers initially on road.

Very early in the game I suffered a friendly fire incident (double 1 on Activation) when my left-hand Line unit fired on my Lights inflicting a casualty (above). My opponents found this very amusing! Worse was to come...

The Rebel Sharpshooters took up position behind the wall next to the cottage. With a 24" range, and hitting on 4-6 they began an intimidating fire on my Grenadiers and Lights. Cotton-wool denotes a unit that has had its First Fire.

The Light Infantry and Grenadiers, both weakened, moved into the shelter of the dead ground provided by the end wall of the cottage.

The cannon proved completely ineffective though this was partly due to forgetting that artillery reduces Hard Cover to Cover.

On seeing a friendly unit rout, the Rebel General's unit, which was occupying the objective, retreated out of it! Result! This would give the Rebels a draw rather than a win.

View from the flank. I was bringing quite a lot of fire to bear but it was a bit of a sideshow. The Rebel sharpshooters had also moved round to the flank.

Aware of the Rebel unit crossing the field to my right, I moved the gun up to the hedge to get a crack at it but the pikes charged me causing a rout! We were unsure how to resolve this. We decided to move the crew away leaving the gun in place. I'm not sure that is correct and have not been able to find any further explanation in the rules.

While the Rebel General's unit remained exposed outside the cottage I decided to commit the Yeomanry but they declined to charge three times despite being accompanied by the Captain.

Even more significantly, the Rebel Captain's unit reoccupied the cottage at which point I gave up though the game was almost over anyway and a clear win for Bernard and Chris.

I didn’t play at all well. I think the mixture of infantry, cavalry and artillery confused my options, the large amount of cover shielded the Rebels and prevented me from bringing my superior firepower to bear, and the Rebel sharpshooters were particularly decisive.

I lost the game but I was pleased with how the 1798 project looked and played. It captured period flavour and made the game sufficiently different  from other R&P games (AWI and ACW) to make the project worthwhile. I had feared the Rebels would be shot to pieces before closing but this didn't happen so indications are that the game is reasonably balanced. I had always wanted to do this war. Rampant games sizes made it possible.