Twilight of the Sun King and some thoughts on generic armies

The Twilight of the Sun King (TotSK) rules cover the period from 1680-1721. They were originally written by Steven Thomas of Balagan fame but authorship subsequently passed through other hands. I'd been meaning to try them for ages but never got round to it. So I already had an interest when the new, third, version was published by the Pike & Shot Society.

It's a high level game, there are historical scenarios, and, uniquely, it combines different forms of combat into a single unit reaction test. The game has, I believe, great promise but I'm not intending to play it just yet.

My Marlburian armies are currently 'between basing' and my 1690 armies turned out to be too small. For grand tactical games with historical scenarios, this has really concentrated my mind on the desirability of having reasonably generic armies that can be used for a range of historical battles (and rules). Time to look again at 2mm, possibly on 25mm square bases?

The other stop factor is the large number of problems with the rules. The TotSK Yahoo Group is awash with queries and an errata (currently 5 pages long!) is in preparation. Sadly this new version of the rules was obviously not adequately tested or proofed. On the plus side, however, there is a lot of interest in and support for the rules from people who want them to work.

There are two lessons for rule-writers here: get them tested by different groups of people who approach the rules in isolation and get them proof-read by someone like me!
Posted by doctorphalanx at 10:28:00 7 comments: 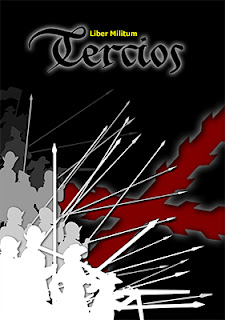 My interest in the Thirty Years War periodically resurfaces, and I started this article some months ago the last time it did. I haven't taken things any further, but I thought I'd post it anyway.

I was waiting to see Impetus Baroque at the time, but at the Cavalier show last year (February 2016) I caught sight of the Liber Militum: Tercios rules. The rules emanate from Spain and the English-language version is not as good as it could be. Nonetheless, it appears to be easier to follow than some rules allegedly originating in English.

My campaign for open-handed pikemen in 10 mm or 6 mm didn't get too far, so I began to consider the Magister Militum 3mm figure strips. These do not look clipable, so I needed to see how complete strips would work on the desired base sizes. With the strips being 20mm long, this exercise may also applicable to unclipped Baccus strips.

Tercios has four types of pike-and-shot unit: Tercios, Classic, Reformed and Modern. I've played or looked at a number of Renaissance rule options over the years. These definitions seem to be a good as any and better than many.

There is some disagreement as to whether the distinctive Tercio formation with shot at the corners was actually used in the TYW. As I understand it the Tercios were not entirely inflexible, but capable of various arrangements. If the shot on each flank were to close up a Tercio would present a simple pike block with sleeves of shot, albeit a large and deep one.

The illustration above shows suggested basing for 15 mm figures. The diagrams (right) show how I would do it with 3 mm strips in a way that would best reproduce the relative numbers and proportions of the 15mm figures.

The iconic T formation for the Modern (Swedes) was my own idea. It may not have been commonly used but it's distinctive and a convenient way of arranging the strips.

I'm not sure of the exact depth of the strips. If they are deeper, then the Tercio square in particular may look better than the way I've depicted it (i.e. squarer). In principle the strips seem to work.

Anyway, this was an entirely cart-before-the-horse exercise as I still haven't even read the rules properly, let alone played them. And I do have some reservations. I'm a bit wary about committing to a rules set that uses bases with different frontages. And I don't think Magister Militum's 3mm range yet has all the required figure types.

Two other developments have also recently occurred. Firstly, I've bought a copy of the new edition of Twilight of the Sun King (more anon) and learnt that a TYW/ECW version is also planned for this year. Secondly, I've seen the first releases in the new 6mm TYW/ECW range from Baccus. Notwithstanding the cast pikes, these are superb figures...