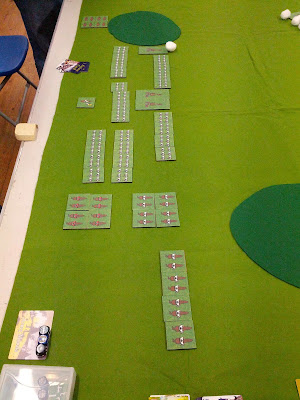 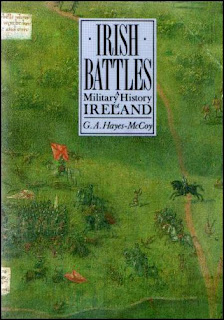 I thought I'd follow this project through here in more detail, so I'll begin with the main references I have to hand. These are:

The Irish Wars 1485-1603, Ian Heath and David Sque (Osprey)
Thanks to the old WRG range of uniform books, Ian Heath has been my staunchest authority for uniform detail throughout my miniatures painting career.

Galloglass 1250-1600, Fergus Cannan (Osprey)
This is a new acquisition. Ospreys can vary. This one looks good.

The Border Reivers, Keith Durham & Angus McBride (Osprey)
Another good Osprey with good illustrations of Elizabethan clothing. I may move on to the Borders later.

British Military Uniforms From Contemporary Pictures, W Y Carman's  (Spring)
Another old book but it may have some information of interest.

For more general background, I also have John Sturt's Revolt in the West and Anthony Fletcher's Tudor Rebellions. There are some other titles I might find in my book collection and I've ordered a few other books which I will mention later if and where relevant.

One clothing issue I've encountered already is the question of sleeveless doublets. Despite the assumptions of Hollywood as well as some re-enactors and illustrators, it appears that sleeveless doublets were rare. I guess that if you are going to wear a jacket it might as well have sleeves, and that shirts were regarded as underwear and not normally exposed except when doing heavy labour. This will be important when painting English and similar infantry.

Although open to change in figure scale and extendable to larger battles, the basic game uses a modest number of 15mm figures on a 2' x 2' table. The figures are mounted on 30mm square bases in numbers varying from 2 (skirmishing types) to 8 (pikemen). Armies consist of about 12-15 bases forming a battle. You can add additional battles and an extra foot in table width for each one.
Read more »
Posted by doctorphalanx at 11:44:00 7 comments:

Warfare at Reading and the other sides of Kallistra

Yesterday I had the pleasure of visiting Warfare at Reading for the first time. It's a fairly typical wargames show. On the plus side the bring-and-buy area was unusually well organised and accessible. On the minus side the games tables were unusually crowded  together and inaccessible.

The trade area was as per normal and I had an interesting chat with Paul and Sally Kerrison of Kallistra. Kallistra's Hexon II is a well-known and, indeed, brilliant system for transferring the digital precision of boardgaming to the analogue world of miniatures. What seems to be surprisingly overlooked, however, is Kallistra's range of miniatures and its Hexon-orientated rules.

It's not a race

This blog has now reached 20,000 pageviews - thanks for looking. I hope you've found things of interest or use.

For my own part I find blogging a useful way of thinking aloud, especially when mapping out new enthusiasms. In fact, blogging about these has proved to be a great substitute for actually spending money on figures and models which would most probably just end up on the lead mountain! Although the virtual lead mountain of declared but unfulfilled intentions is more public and equally embarrassing, it costs virtually nothing and doesn't require any physical storage space.

I've even found a parallel solution to cure my rampant book buying. I now add books to my Amazon Wish List instead of hitting the Buy Now button. Before I get round actually to ordering them the respective enthusiasm is most likely to have been replaced by a new one. 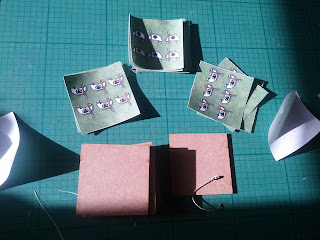 I'm just working up to a trial game of Maurice. Having decided to dispense with national characteristics I found myself a few units short for a 100-points-a-side game. Earlier this morning I printed out some more labels and mounted them on MDF. Job done. No difficult uniform research that someone might well fault at a later date, no ordering expensive figures, no months of painting and basing.

If I ever do get some proper wargame armies for Maurice, they will either be second-hand ready-painted ones or 3mm ones if Oddzial Osmy ever does them.