The areas I'm modelling and painting are the same ones I'm currently focused on gaming.

These are ready to use but aren't finished. 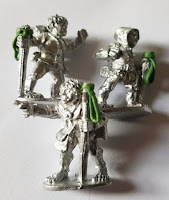 28mm warbands for Dragon Rampant including Elves, Orcs, Goblins, Halflings, Aegean Bronze Age, North European Bronze Age, Men of the North, Feudals and Arthurian Romance. These are based and can be used, but playing with unpainted figures looks ugly so I promise to paint each warband some more before bringing onto a table again.

28mm Border Reivers and circa 1671 Buccaneers and Spanish for The Pikeman's Lament. The Reivers are based, undercoated and have been given a base colour. The 1671 figures are based and filler has been added to level them off.

28mm 1798 Irish Rebels and Militia for Rebels and Patriots. These are now part-painted.

28mm Russian Civil War for The Men Who Would Be Kings. These have been cleaned up and mounted on bases.

28mm WW2 for Chain of Command

28mm WW2 Ardennes US and Germans. These are based and undercoated. They need painting but my priority is to make some 'spindly' hedges, and make up some MDF building kits so I can start playing.