A number of 'Gadgets' - including my list of favourite blogs - have suddenly disappeared! No, I wasn't editing the blog at the time...I saw some notice in the browser saying "invalid blog list" or something of the sort, and when I looked at the Layout in Design view the blog list and a number of other list gadgets were simply missing.

The blog is backed up and I have searched the backup but the blog list content does not appear to be included. This means I am going to have to recreate it from scratch. The list was a long one and, regretfully, I can give no guarantee that I will be able to recreate it in its entirety.

My apologies to any or all bloggers whose blogs are missing. Please bear with me while the list is rebuilt. I will start with those blogs kind enough to link to this blog.

It seems that I am not alone and that Google are working on the problem. If you also have this problem, Google your blog's name and click on the little triangle to open a cached copy. You can then save the page.

I'm pleased to note that the Blog List and other list widgets have been restored and sooner than I expected...so thanks, Google, for sorting it out. Despite the glitch, seeing this get fixed does promote my confidence in the Blogger system.
Posted by doctorphalanx at 01:56:00 2 comments: 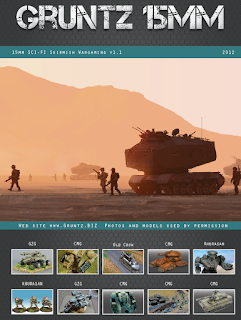 Although I spend half my time thinking I should focus on a few key games, I spend the other half musing about expanding into new 'periods'. My current fad is 15mm Sci-Fi skirmish, something that has been gnawing away at me since April. Despite the plethora of 15mm SF stuff at the Salute show, it was only when surfing the web a  few days later that I actually got bitten. That was, I admit, very bad timing.

Anyway, a review of the rules options led me to Gruntz 15mm which seemed to be  the most attractive and promising. I've studied the rules and I've read reviews and explanations, but I haven't actually played them. I expect they're fine, but what has captured my imagination is the army-building aspect.

Although Gruntz offers its own very wide universe and backstory, it is a completely flexible system which allows you to plug in any models you want. Although the armies I'd like to create would have SF technology like power armour, mechs and grav tanks, my current interests are based around near-future terrestrial factions rather than extra-terrestrials.

I have three in mind: a mid-tech 'RussFed' army  using ArmiesArmy models, a hi-tech 'US Marine' army using mainly GZG models, and maybe a lo-tech 'Caliphate' army using Khurasan figures. There are other possibilities, but I don't want to over-extend before I even start.

Gruntz has the advantage of being playable on quite a compact table (say 4' x 4') and requires only a modest collection of figures and vehicles for each army (say 300 points in game terms). I've been thinking about a number of scenery options - a ruined city, oil refinery or shanty town - but my current favourite is a recycling plant and scrap yard which will provide plenty of loose clutter.

As I don't seem able to shake this fad off and with the SELWG show coming up shortly, I am highly likely to go into purchase mode.
Posted by doctorphalanx at 10:40:00 5 comments: