TMWWBK - ‘Get off my land’ replay

I posted a game report of this scenario before. We decided to run it again but changed ends, as it were. I took the Mahdists - three Irregulars and three Tribals - whilst Ian had the British - three Regular Infantry and a Machine-Gun.

The scenaro makes the Attackers deploy their range away from any edge, but as my range was an upgraded 24" there was nowhere to deploy them on a 6' x 4' table! So we changed this to 18", the same as in our first game.

By choosing to deploy on the edge he did, Ian was almost on top of three of the objectives right from the start, but as luck would have it the centre of this edge was also the zone I had nominated for two of my Tribal units to pop up in.

This allowed me to place them at 8” from the British. This is almost as good as it gets, but would have been better if I could have placed them in cover. If they survived Ian's next turn and if I could activate them, I could charge home without the risk of failing to double adequately.

Had I made contact I might have overcome one or two of the British units. Failure to do so left me exposed to the cycle of being pinned, attempting to rally and gradual or not so gradual extermination.

Our club AGM curtailed our gaming time. At the point we decided to stop I was technically the winner as the British had by that time taken only two of the objectives. But had the game continued I think I would have been wiped out, so I take no satisfaction in this 'victory'.

We are still trying to work out how best to use Tribals - how to survive and how to make them more than a one shot, one tim e weapon. Perhaps it's too early to admit defeat but I'm inclining to Ian's view they should be reduced in price to 2 points.

We also had some dreaded Line of Sight issues but I'll gloss over that until we've had more time to think about it.
Posted by doctorphalanx at 13:00:00 4 comments:

Of Trolls, Orcs and Goblins

I've been collecting figures for my Elf, Troll (Orc) and other armies for Dragon Rampant, so this is a good time to share some more ideas.

As I outlined before  my inspiration comes more from Poul Anderson's The Broken Sword than it does from Tolkein. Having said that, the Fantasy market has long been engulfed by the Tolkein tsunami, so it is not easy (or necessarily advantageous) to escape the influence that has had.

Tolkien originally used Goblin as an alternative name for Orc, while Anderson has Goblins as a separate ‘race’. Even if you reach behind their depiction in modern literature to the folkloric origins of Giants, Trolls, Orcs, Goblins and Ogres, these concepts are overlapping and confused.

I like to think of Goblins as halflings and separate from, if allied to, Orcs/Trolls, and this view seems to be generally favoured by other gamers and figure manufacturers.

In the interests of variation - a key element of Fantasy armies - I was surfing the web for Goblins with the intention of adding a unit or two to my Troll army when I came across some relatively new  greens sculpted by the prolific Goblin sculptor Kev Adams. I found these particularly appealing and an enquiry on the Lead Adventure Forum pointed me to Knightmare Miniatures, a company based in Spain.

Anyway, I was so entranced, specifically by the 'Doom Goblins' that I ordered enough figures for a whole Goblin Warband. I even included Goblin wolf-riders. Although I think that is purely a Tolkein invention, I liked the idea of having a DA force with some Riders in it.

I was thinking of reinforcing these with other makes - Midlam, Otherworld, Weyland and Artizan, all of which I like, but I now have all the Goblins I need without having to bother about compatibility.
Posted by doctorphalanx at 07:05:00 No comments:

Two games of 'The Men Who Would Be Kings'

Continuing this year's focus on Rampant games, my friend Ian and I played two games of The Men Who Would Be Kings.

Our first game featured the 'Run to the Hills!' scenario using my British and Afghan forces. The Brits (me) had to reach the far end of the table while running the gauntlet of the Pathans (Ian) who were on their first tabletop outing. 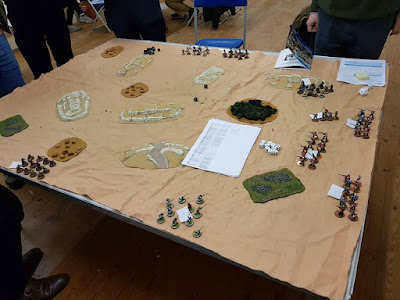 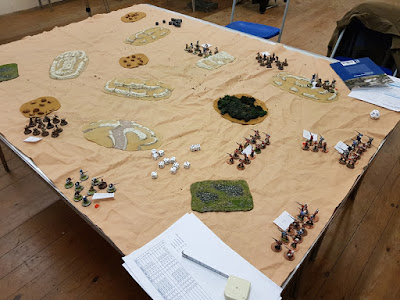 We used random Leader Values and Leader Traits, but found the latter hard to remember. I wanted to minimise on-table clutter so abandoned the unit cards used in earlier games in favour of off-table rosters but we soon realised it was still necessary to ID the units on-table which we did with temporary pieces of paper. I've since utilised some lettered Scrabble-style tablets. 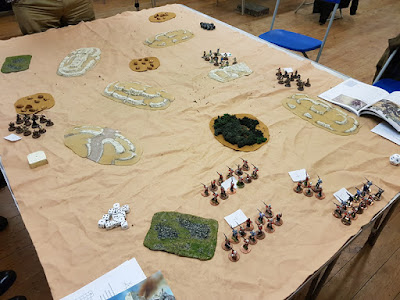 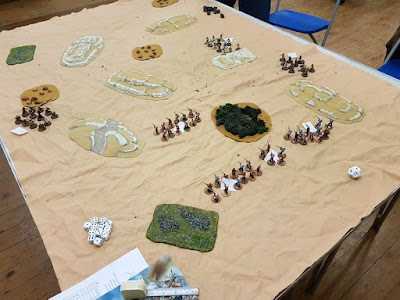 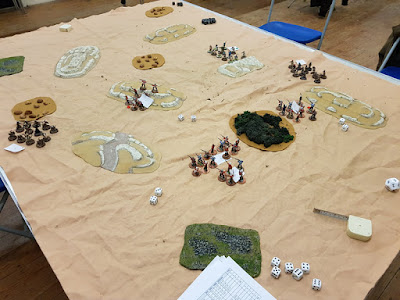 We initially made a mistake in the Pin Tests, subtracting for casualties in the game rather than casualties just inflicted. The minor differences between different Rampant games are easy to confuse, and I am currently working on a spreadsheet to compare them. 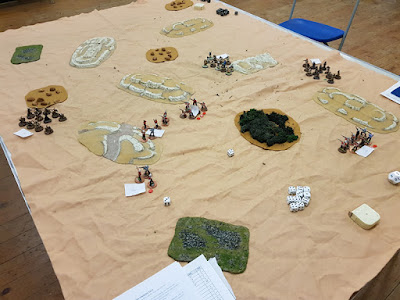 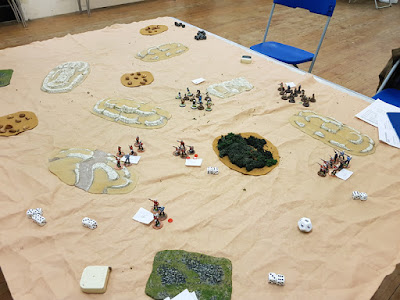 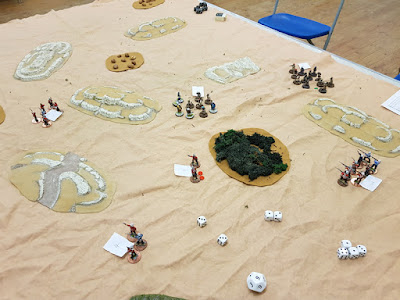 The photos show the course of the game. Owing to the Pinning Test error, the British appear a lot more battered than they should be. Allowing for this rule error, this game was or should have been a British victory. 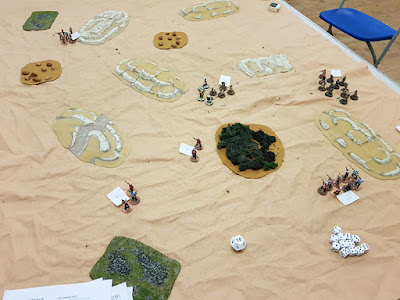 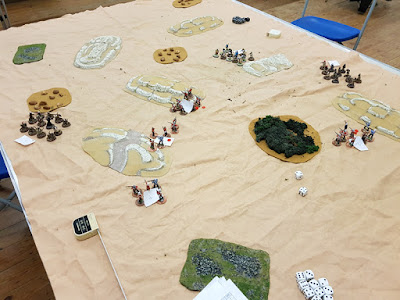 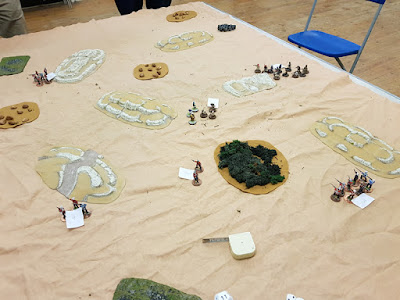 For our second game Ian brought his newly acquired Sudan forces, and we did the 'Get Off My Land' scenario with the British vs Mahdists. 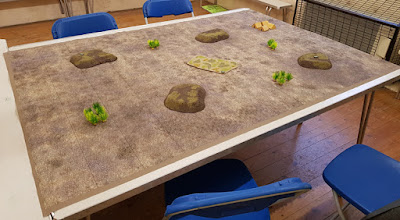 Ian laid out the table with a scattering of hills, some small clumps of vegetation and an area of soft ground. Six markers were distributed as per the scenario rules. The British had to search these by  Standing To when in contact with them.

The Mahdists had three upgraded Irregular Infantry units (@ 5 each) deployed centrally and three Tribal units (@ 3 each) which could pop up in nominated sectors during the game.

The British had three Regular Infantry units and a well-drilled Gardner Gun (all @ 6 each). 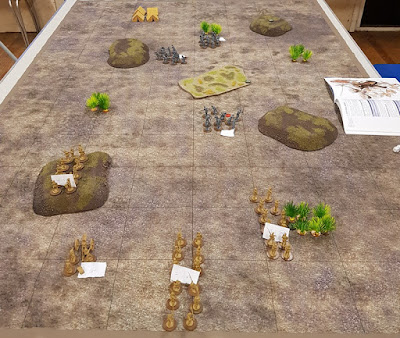 We agreed to drop the Leader Traits. Once again we adopted paper IDs to identufy the units. I also added the LV values to mine as this was the only difference between my infantry units. 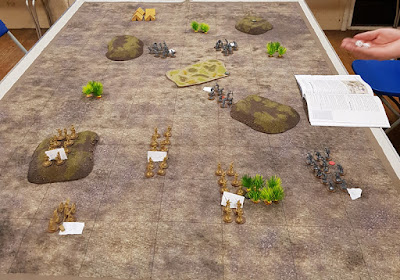 My plan was to destroy the Mahdists piecemeal while searching at least some but not necessarily all the objectives, so I deployed on the edge furthest away from the main enemy concentration. It was the Falklands strategy.

My progress was entirely systematic. I moved towards the objectives, shot up any Mahdists encountered and only Stood To over the objectives if all the closest Mahdists had been neutralised by pinning or elimination.

Basically it all went like clockwork and a point came when it was a virtual impossibility for the Mahdists to win. 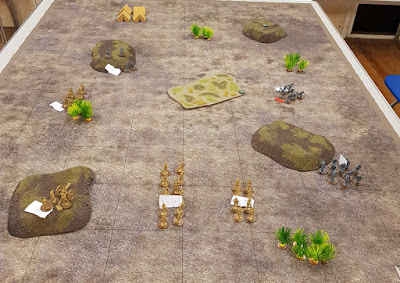 Ian's chances weren't helped by forgetting to bring on one of his hidden units when it might have made a difference. He did bring it on but late in the day and unsupported, so it just got chewed up in its turn. 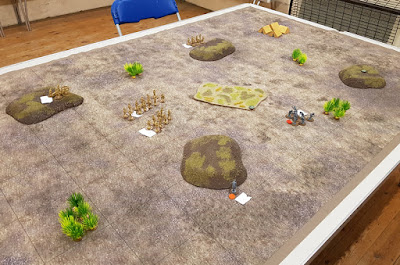 IMO it's hard to fight Regulars with Tribals. Tribals will tend to have twice as many units as Regulars and need to attack in that 2:1 ratio, i.e. sending at least a pair of units against each single Regular unit. The latter can, of course, only shoot at one unit at a time. 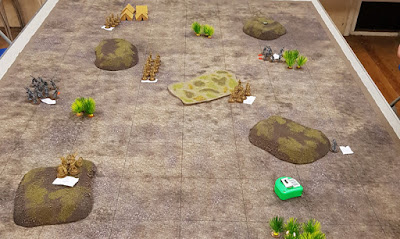 In this scenario the Tribals also need to 'Go to Ground' to optimise their chance of survival. Even this is tricky. If Gone to Ground the Tribals can't be targeted beyond short range so the Regulars will be obliged to advance to within 12" of them. At that point the Tribals can try to Activate (with a 58%, 72% or 83% chance of success depending on the LV) followed by a 50% chance of Doubling into contact (4+ on 1D6).

If you attack with two units your odds of getting one of them into contact is better than evens and then you will have 16 to 12 dice in the melee. If, however, they are caught in the open they will be subjected to a cycle of being shot at and then having to rally which will have only one outcome.

All figures are Perry plastics, undercoated but not yet painted.
Posted by doctorphalanx at 04:14:00 2 comments: