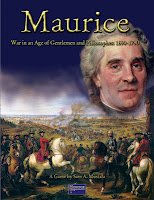 In any event, painting up even two new armies in 10 or 15mm is time-consuming. I get there in the end, but by then my interest in the period and/or rules has usually passed on to something else. It's a no-no in some clubs but I'm seriously wondering if putting unpainted figures on the table is the only answer. I could then be using one pair of armies whilst painting another. Alternatively I could make up some counters like the birds-eye-view counters used in the rulebook diagrams.
Posted by doctorphalanx at 16:51:00 No comments: