My copy of Rebels and Patriots arrived last Thursday. It was highly anticipated and I'm genuinely excited!

The biggest innovation is probably variable-length charge moves,  which should add an additional touch of drama. Otherwise they generally follow the usual tried and trusted Rampant game mechanisms. Those chasing more detail should read David Sullivan's excellent review on the I Live With Cats blog.

I've already accumulated a couple of ready-made 28mm armies for it, and my first step was to look at the army lists and check to see if I have enough stuff for a standard-sized game (24 points a side).

The armies in question are American War of Independence British and Continentals.

Infantry units are basically 12 figures but for +/- 1 point they can grow to 18 or shrink to 6. If I was designing an army list competitively I’d regard small units as risky and large units as extremely good value, but I’m not in that situation and I welcome this flexibility as it will allow me to optimise use of the figures I happen to have. Indeed, I think this is an extremely cunning design move to accommodate gamers with existing armies.

For the British I have:

For the Continentals I have:

I’m thus short on Continentals and will have to borrow some other figures (or upgrade them to Veterans) until I can get some more recruits. I need to add my usual 2p coin bases to the figures and prepare two or three boxes for storage/transport but otherwise I'm good to go.

I also have some 28mm American Civil War armies on order, but I'll have to wait till they arrive to see what I can make from them.

The 28mm 1798 armies continue to accumulate but won't necessarily be complete until next year.
Posted by doctorphalanx at 03:15:00 No comments:

Buccaneers vs Spanish for The Pikeman's Lament

I didn't list 'Buccaneers' amongst my projects for 2019 as it wasn't current, but I have been giving the idea a lot of thought. Musing about potential projects has always been a big part of my engagement with the hobby - a sort of wargame equivalent of window shopping.

My attraction to the Buccaneer era goes back to the pirate imagery of childhood, the publication of The Pikeman’s Lament, the appeal of the Northstar 1672 range, watching the Versailles TV series (about Louis XIV) and some discussion on the Lead Adventure Forum (LAF). It didn't come together straight away but things gradually fell into place.

In developing the idea I am indebted to Jose Maria Cagiga Mata of the Spanish Lead Painting blog  for help with  figures, costume, background information and ideas.

For the benefit of those not fully up to speed, Buccaneers were English, French and Dutch freebooters licensed by European powers in the second half of the 17thC to attack and loot Spanish ships and cities in the Caribbean.

I like to hang my model armies on the peg of a specific historical reference point so I'm focusing in particular on the career of the Welsh Privateer Henry Morgan (1635 – 1688) whose English forces successfully raided a number of Spanish cities including Panama City in 1671.

Despite their exotic and piratical nature, Buccaneers were typically military veterans, fought in conventional military units, and by 1660 were more soldiers than sailors in appearance. So this project will feature fairly conventional pike-and-shot forces rather than the more cinematic imagery of the Golden Age of Piracy. The Pirate actions of the early 18thC were essentially naval actions, while the Buccaneers also fought large scale land battles.

Although the project is more-or-less planned, I don't currently have the time or space to pursue it, unless or until I have made more progress with the 28mm Reivers.
Posted by doctorphalanx at 22:57:00 4 comments:

I decided to report on this project as I go along, partly to put pressure on myself to keep going, and otherwise because my approach might be of interest to others or I might need some feedback on options...

I always make a list of stages. Then I can repeat the process in the same style if I need to do additional figures at a later date. I also mark off progress so I know where I am and to give myself a sense of achievement.

The figures are essentially on one continuous if virtual conveyor belt. I do something to each figure in the army or armies, then repeat. I never paint unit-by-unit.

First step is to prepare the castings.

1. File bottom of bases flat.
I just run the figures up and down a large domestic flat file. A couple of passes is usually enough.
2. Remove casting tags and any flash.
Very few of the foot figures had any flash or casting lines, but they did have little casting tags which needed to be knocked off or cut. The Timeline horses were more challenging but I think they will look alright once they are painted.
3. Correct leaning figures.
Some figures seemed to be bent over in relation to the angle of their bases. This was easily corrected by carefully bending them at the ankles.
4. Drill holes for pikes and superglue pikes.
Thankfully the pikemen are all empty handed allowing me to add North Star pikes. Some hands needed drilling with a pin vice. I used to use 2-part epoxy resin for sticking pikes etc, but have been experimenting with superglue. Epoxy resin seems to be quite scarce these days.
5. Assemble gun, cattle, riders and stick riders on horses.
6. Add Green Stuff to 'shorts' and around arm joints on riders.

I’m pleased to publish a guest article by Simon Jones, a reader of this blog who has a very systematic scheme for organising playing aids.

This is the kind of thing I make up for games we play regularly. I just grab the box and go - they are all labelled. 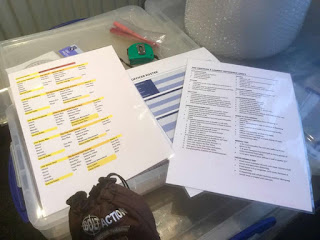 I complete unit info in Excel and can amend and add info to make new unit sheets easily. I laminate these, and QRFs etc. I can then reuse them with water soluble pens. 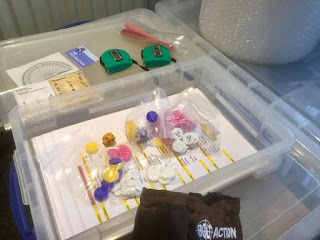 The bag contains dice, tokens etc. The box has tape measures (cheap in B&Q, but any other brand will do), other gaming bits and pens. 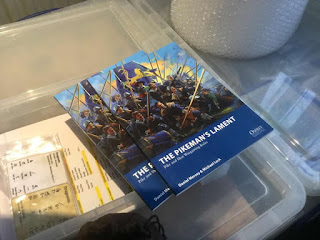 If I can every now and then I find a cheap extra copy of the rules. It helps when people sit in on games. 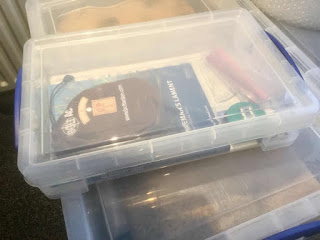 You can find extra bits like unit cards on the Internet. I laminate and make up this kind of stuff as well. I have started adding movement bases to boxes as well now. 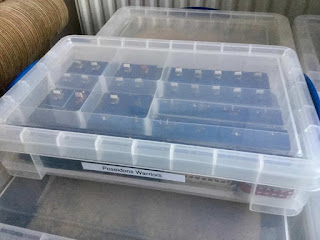 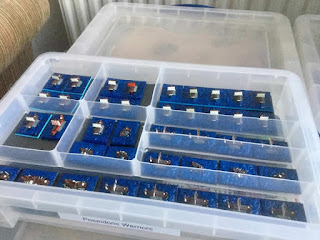 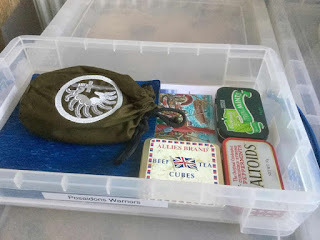 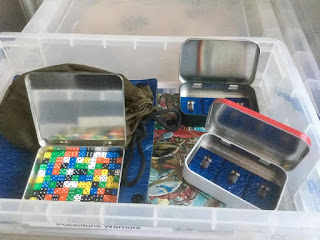 For Poseidon's Warriors I even have the ships included in my rules box.

So I have boxes for:

You can obviously reuse boxes etc when no longer needed. To be honest the cost is not great. I know I have everything to play easily to hand and portable.
Posted by doctorphalanx at 12:41:00 No comments:

GAMES
I didn't actually get to play many games last year, so this year I need to be more proactive. Games I'm keen to play are:
PROJECTS
I've learnt not to over-face myself with too long a to-do list, so while I have a lot of unfinished and potential projects, I'm only going to list (1) major projects which are (2) currently underway and (3) which I seriously intend to progress during the year:

So there you have it: a modest range of rules systems (mostly closely related) and a firm committment to working on only one major painting project.
Posted by doctorphalanx at 13:44:00 6 comments: