I'll keep it brief and to the point. I set out to do more painting and gaming this year. I didn't achieve as much as I hoped, but I did add substantially to my collection of armies and most of these are either fully-painted purchases from eBay or at least based and undercoated (or soon will be) and thus close to being usable according to my own heretical ethos of what is acceptable.

Since my six-monthly review in July I've added the following forces:
These have been organised, cleaned up, assembled and based. Other new armies, in various stages of completion, include:
One thing that's helped me stay productive is keeping a very brief diary of what I do. At the end of each month I tot up the days when I did at least something. This gives me a sense of achievement and highlights any lapses without feeling oppressive.

Although it’s not been an outstanding year for gaming and painting I made over 60 posts to this blog, partly as a result of illness and post-op indisposition. I'm now much recovered.
Posted by doctorphalanx at 08:04:00 4 comments:

It's time to vent some thoughts about some more general aspects of wargaming...

In the context  of wargame rule reviews reference to "Eye Candy" is most likely to be pejorative. Eye Candy is the seductive luxury of big-business wargaming represented by Games Workshop and Warlord Games as opposed to the honest typescript of those old WRG rules...

The deployment of Eye Candy, so the usage implies, is at best irrelevant and at worst a deceptive indulgence, rendering a ruleset nothing but a painted hussy of a ruleset and masking essential worthlessness.

But hold on. Before we endorse that streak of Cromwellian puritanism, aren't  the toys we play with Eye Candy too?

You don't need them. You can use counters. But they are part of the appeal, even the main basis of the appeal. And seeing Eye Candy in a rule set is part of the pleasure of wargaming...and inspiring!

I was a bit short of Light Missile figures for my Halfling Dragon Rampant warband so I did some conversions with Greenstuff. 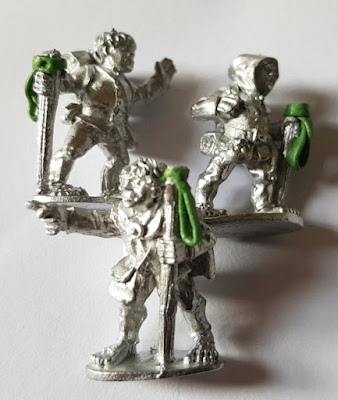 These are Copplestone Adventureres but not very warlike so I changed the staffs into staff-slings. The challenge with Greenstuff is to avoid making the detail too big and clumsy for the scale of the figures, so I've learnt to use as little Greenstuff as possible. 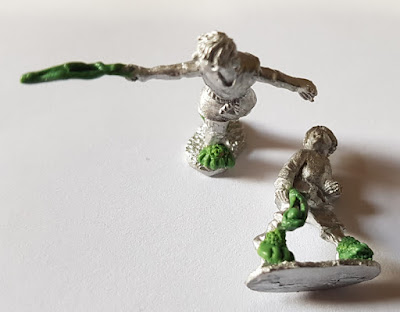 These were two unarmed boys from the Foundry Viking Villagers pack. I needed some wire armatures for the slings but couldn't find any wire thin enough. Eventually I straightened out some 'Bambi' staples. The difficult part was modelling the feet. They do look big in the photo!

These conversions are fairly crude but they're the best I can do and good enough, I hope, for one-off figures. I remain in awe of professional sculptors who achieve such good detail, proportions and a natural look.
Posted by doctorphalanx at 09:02:00 No comments:

Last game of the year was a welcome return to Dragon Rampant. I laid out the 6' x 4' table and we played with 36 points (in contrast to Lion Rampant) in order to allow more scope for magical elements. We allowed units to be 1" from friends, but otherwise attempted to play by the rules as written.

We also used Quests, both choosing three very similar 2-Glory ones. Winning the basic scenario was worth 5 Glory, so it was necessary to have a potential of 6 Glory to provide an alternative path to victory.

The game featured Ian's beautifully painted Chaos army versus my barely undercoated Elves on their first outing. As usual, my figures are based on 2p pieces - thank you to my fellow gamers for continuing to keep me supplied. Many of Ian's figures towered over mine, projecting an initial sense of menace and intimidation!

'The Chaotic Bunch' were:

This is the first time we played with a significant linear obstacle - the stone wall. We were perplexed as to how a unit could Attack an enemy standing back, say 1", on the other side of a linear obstacle, so decided to ignore the obstacle for the purpose of Attacks. What should happen is that the Attack should be done in two stages. The first stage brings the attacker to the wall even though this may be closer to the enemy than 3". A subsequent Attack then takes the Attacker over the wall and into contact. In other words, while a normal move cannot end closer than 3" an Attack stopped by a linear obstacle can. Had we played this way I'd have got in a round of extra shots.

The Pendraken dice-frame strength markers look overly prominent in the photos but work well for Single Model Units and Reduced Model Units. The blood drops (indicating Battered units) are from Products for Wargamers.

The enemy Leader - an Elite Rider with Armour of 4, was a tough nut to crack. At first I started to have serious doubts about the effectiveness of missile fire and at one point I thought everything was lost. But with only 6 Strength Points, Elite Riders (and Elite Foot) are brittle. Killing the enemy Leader fulfilled one of my Quests and caused the enemy Warband to take Courage Tests. 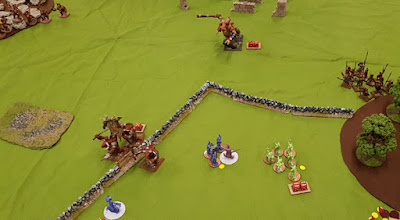 The Minotaurs were after my Druid, another Quest target, and eventually succeeded in killing him. They were about to do more damage when they failed to Activate and crucially lost the initiative. This was something of a turning point in the game and Ian blamed this for losing him the game.

The Chaos Reavers (top left in the above photo) took the Scenic route through the rocky outcrop. This severely delayed them. Had they arrived earlier it could have been a game changer. 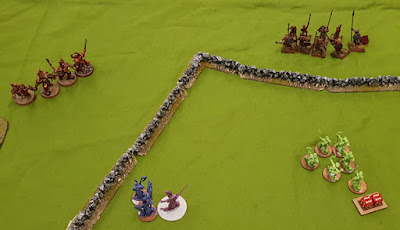 The end game. The Chaos Reavers (left) made a strategic withdrawal to take them out of harm's way while the Ravenous Horde (right) were seen off by more missile fire.

Although I had wondered about the power of missiles, they worked in the end and I would seriously consider taking the Spearmen as Mixed Weapons in future rather than as Offensive. Once you decide on a modus operandi for a particular army you might as well rationalise its application. An Elf army in which every unit can deliver a sting rather appeals.
Posted by doctorphalanx at 03:38:00 No comments:

Ian and I played a couple of games of Commands & Colors Medieval. We chose the first two Byzantine-Sassanid scenarios, Thannuris 528 AD and Melebasa 528 AD. These were very much trial games, finding out how things worked and what things worked.

The game functions very similarly to Commands & Colors Ancients, but it's more fluid and more bloody. All things being equal, that should make for a quicker game, but that's balanced to some extent by the introduction of the faction-specific Inspired Actions which give you something else to think about and remind me of the events and tactics in Sam Mustafa's Rommel. These are either an unnecessary addition or a clever way of adding army flavour without proliferating the unit types or cluttering the rules.

I forgot to take any photos of the first game. Ian played the Sassanids whilst I had the Byzantines. It's a very open battlefield and the game was close run. My left was badly mauled but I retreated to and held a couple of hill hexes, successfully fighting off attacks before winning the game elsewhere.

Hills are a great equaliser in C&CM and greatly degrade attacking cavalry. In the second game there was a large central hill mass which completely changed the dynamic turning the game into a much more attritional struggle. I eventually won this struggle thanks largely to my Heavy Infantry and then pressed the enemy against his back edge.

The length of Evade and Retreat distances means you can easily end up on or near the back edge. With no place to go this is a bad place to be. At a number of points in the game I was faced with decisions about whether to make voluntary moves which would have meant moving back. But soldiers are there to fight, not fall back. In most cases I rejected that and I believe it paid off.

The main lessons learnt were: (1) Move forward and attack - always a good idea in C&C games - but especially so here to give yourself space, and (2) Find a good use for your relatively weaker Heavy Infantry - this will usually involve hills.
Posted by doctorphalanx at 13:28:00 4 comments:

Curse of the bendy pikes in 28mm

I bought some Eureka Mycenaen spearmen from their new UK outlet to supplement the Foundry Aegean Bronze Age (Mycenean/Minoan) army I bought at the 2019 SELWG Show for Dragon Rampant/Lion Rampant. They are basically nice sculpts and a good match for Foundry, but they present a particularly bad case of the curse of the bendy pikes. There is no way I would attempt to keep them as they are. I just don’t understand why the designer, manufacturer and other customers should want them like that.

Replacing them is straightforward: it just requires a waste of time, effort and cut fingers.

First step is to cut away the unwanted cast spears (or whips?). Scalpels might seem the obvious tool for this job but these days I tend mostly to use Clippers and Files. Clippers are great for cleaning up (and conversions). It's surprising how much or how little you can remove with Clippers without damaging what's left behind. Files give a smoother, more rounded finish.

After removal I drill out the hands using a succession of ever-larger Pin-vice hand drills. I have three drills preloaded with different bits. It saves a lot of time changing bits. I think I'll get some more.

Next step is to replace the pikes with wire spears from North Star and other suppliers. I used to use piano wire for pikes, but these days you can get wire with shaped heads and they are only slightly more lethal. These are glued in place with my favourite superglue of recent times, Gorilla Super Glue Gell.

I'm prepared to replace a few spears/pikes here and there but I must remember that my next spear/pike army (if there is one) will either come with robust spears or empty hands or be composed of 2mm blocks.
Posted by doctorphalanx at 10:02:00 7 comments:

This was my second game of Lion Rampant, fought back in January, and was a first outing for my Late Medievals. Simon commanded the Burgundians whilst I had the Swiss. The armies were 24 points each.

I had designed the Burgundians as a steady warband with good missile-power and the Swiss as do-or-die desperados.

My plan as the Swiss was to conduct a delaying action on my left with my Bidowers while attacking on my right with the halberdiers and, more cautiously, in the centre with my pike and Men-at-Arms.

My Fierce troops certainly had Simon worried, a threat I jokingly exaggerated! In the event they were slow to move off and were then very badly shot up. One of the units never recovered. The other was delayed. This was basically the end of Plan A.

My best and only remaining chance then lay in the centre - Plan B. I wiped out the enemy Crossbows with my Men-at-Arms but the opposing pike went into schiltron. This made the pike-to-pike contest more-or-less even when it would otherwise have been in my favour.

I was successful in using the Bidowers to tie up the units on Simon’s right, but the only point of that was to win elsewhere which I obviously didn’t.

Full marks to Simon for his steady defence. High quality Archers certainly need to be treated with respect.