Flight and other bases for Gruntz 15mm

I usually base figures on a combination of steel and MDF, the former for storage and transportation in magnetic-lined boxes and the latter for thickness so that players are encouraged to handle the bases rather than the figures.

With individual figures and models it is inevitable that players will pick them up by the figure/model rather than by the  base, but this isn't too much of a problem with the Sci-Fi figures as they are generally quite robust and don't have fragile bits like bayonets and flag poles. Accordingly, there isn't much point in doing thick bases so I'm just putting the infantry on coins and the vehicles directly onto steel.

Following the use of the coins I decided to use round bases for the mecha and grav vehicles, and rectangular bases omly for tracked and wheeled vehicles. In all cases these will be of minimum size and unobtrusive.

The grav bikes, drones, VTOLs and grav AFVs presented the most novel challenge as they are not like anything I've had to cope with before. Grav vehicles need to be off the ground but no more than necessary. 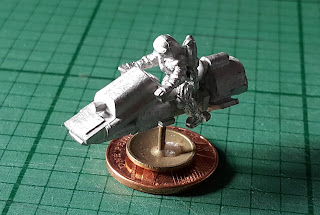 The bikes came with cast metal bases but I preferred to replace these with upturned drawing pins (thumb tacks) as these seemed stronger. 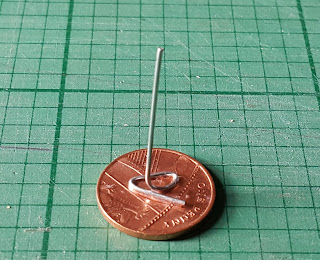 I felt the grav drones did need to be higher but I didn't want the stands to be too thick. I had some piano wire, but didn't know how to attach or support it at the base end. Then I hit upon the idea of using paperclips. By bending the clips I was able to create supports that were both thin and robust. 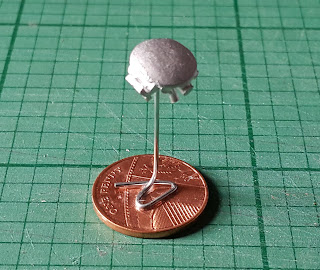 The GZG AFVs are very heavy and needed something more than a paper clip to support them. Originally I was going to use an upturned drawing pin supporting a piece of brass tubing, but the ordered brass tubing never arrived. It then occurred to me that I could use the same approach as with the drones but replacing the paperclips with heavier wire cut from wire coat-hangers. 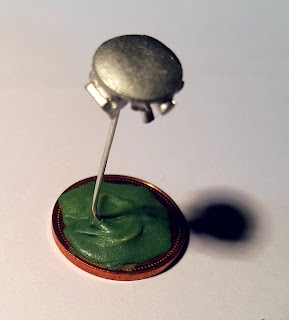 Finally, the VTOLs will also be put on coat-hanger wire but this will be cut longer.
Posted by doctorphalanx at 03:33:00