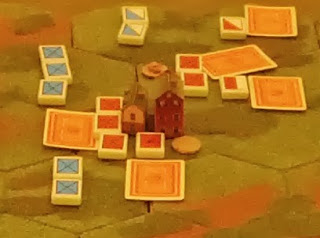 I recruited a couple of friends at my local wargaming club to try out my Solferino scenario for Martin Rapier's Rifle and Kepi rules while I umpired. Since my previous post I've added in the French I Corps. The map and OOBs are below.

The first lesson was how not to set up Hexon II. I put it together upside-down with just a few clips and then tried to turn it over. There was a resounding crash as the pieces came apart and clattered down on the table (without mishap). I should have used more clips, but in order to speed things up we placed the Hexon on a blanket which held it together well enough.

Rifle and Kepi are for fighting 19thC battles at grand tactical level and fill less than one side of A4. A development of Richard Brooks' Terrible Swift Rules, they are very much in the Wargames Developments style (Hexon, playing cards, simple but subtle). I've had the benefit of some email communication with Martin who kindly answered a few queries, but everything you really need is in the rules if you read them carefully, and they play very smoothly indeed despite their brevity.

This is very much a grand tactical, rather than a tactical game. As general, your job is decide where troops are sent, when they deploy and when they attack. Once in contact, you lose control until the contact is resolved, although you can feed more troops in. Brutal but realistic. We got through three turns in two hours. With more familiarity, I would estimate at least five turns in the same time, if not more. A turn represents one hour of real time.

In the historical battle the French concentrated against Solferino whilst holding off the Austrians further south. This remains the best option for the French. The challenge for the Austrians is to move some of their weight northwards but they are hampered by poor C3 and inevitably reluctant to give up their prepared defences (indicated by the round markers). 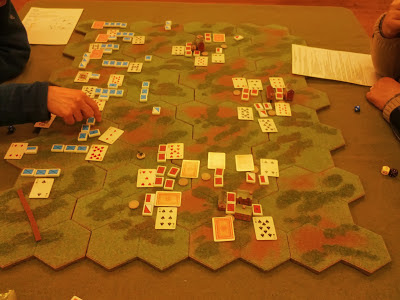 The French boldly advance, including their cavalry. The cavalry got in the way and would have been better kept back for overrunning routed troops in the end game. 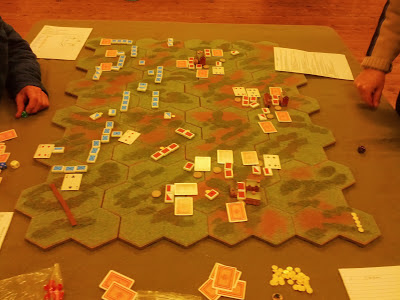 The Austrians move against the French cavalry in the centre, albeit at the risk of exposing their own rear! The facing of the blocks is not always obvious but we clarified that by placing a counter to indicate the front/head. The French cavalry brigade is destroyed. (The number depicted in yellow counters in the bottom right-hand corner was an improvised way of indicating the turn for the benefit of the camera!) 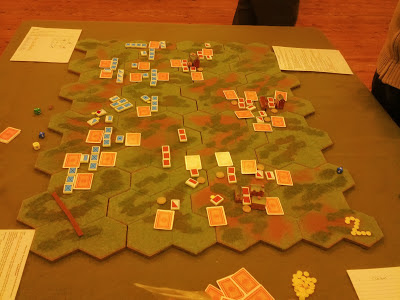 In the temporary absence of the French player I had to take over command but avoided doing anything drastic. The routing French cavalry cancelled the turns of the friendlies interpenetrated. The Austrians squared up their line. Most of the units are deliberately holding (or dithering) at this point. 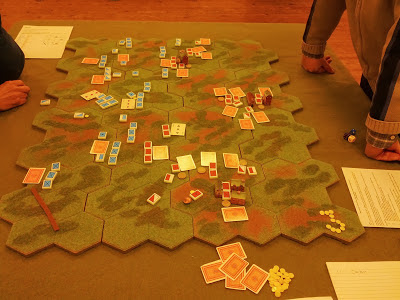 The French attack both Solferino (in the north) and the Austrian IX Corps (in the south). Ideally the French attack on Solferino would have been more concentrated but the rear French division which should have moved centrally against Solferino was dithering and the hours were ticking away. 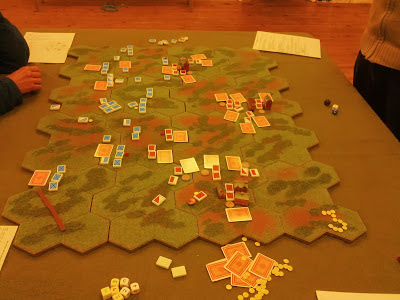 At Solferino both sides lose heavily. The Austrians hold Solferino but would soon be overwhelmed if the game had continued. The combat in the south was a standoff with relatively low casualties. 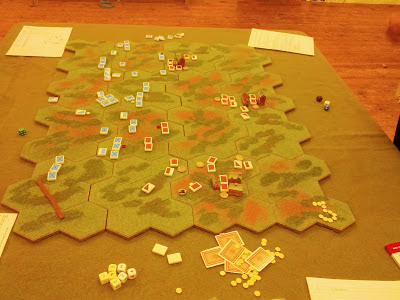 The situation at the end of turn 3 with the table clutter removed. The miniature playing cards are usable but untidy so I've ordered the Play 5 game from Menkind so I can plunder its little tablets with playing card values. (Thanks to Bob Cordery for the idea.)

Despite recent discussion about using felt roads on Hexon, you will notice that none are depicted as these don't actually play a part at this level with the troops already out of road column.

The game, as far as it went, broadly followed the historical battle. The players both enjoyed the game and were pleased with the rules. Given a map and OOB, it's relatively straightforward to create a scenario and Rifle and Kepi has a lot of potential for refighting famous historical battles in toto. As such, it's just what I've been wanting for many years. 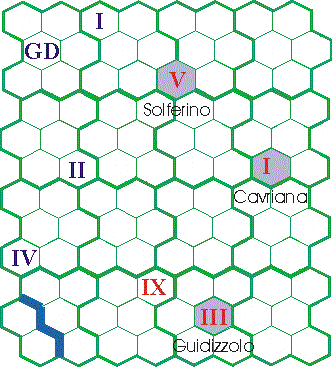 Battle commences at 5 am. Austrians are deployed and dug-in. French are in column. Each corps is deployed in and adjacent to marked hex. The timing and entry position of the French I Corps may need further amendment. The scenario ought to have declared aims and objectives, but I just wanted to try out the rules so these were left to the instinct of the players.