I've been so busy since my recent retirement from work that I've had virtually no time for wargaming, modelling or blogging, but I've broken the back of a lifetime's domestic backlog and today the coast is clear for bringing together some of the components of my 19th Century grand tactical project using Martin Rapier's Rifle and Kepi rules. 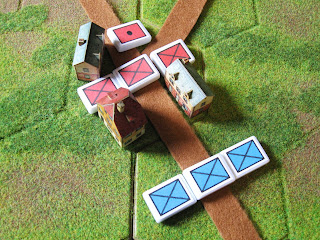 My first aim was to try out felt roads on Hexon to see how/if they stick and how wide they should be. I am planning to use brown roads for this project and black roads for my 3mm 1940 Hexblitz project. I'm glad to say that, as expected, the felt adheres quite well. The strips shown are 20mm wide. Perhaps 10mm would be adequate and, indeed, better. 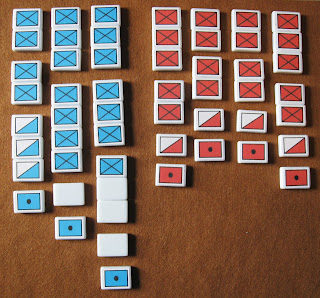 Although I need to revisit my sources, this picture shows my provisional stab at the blocks needed for Solferino (1859). I need to add a few labels but according to my initial calculations, these are all the units I need to represent the corps that were actively engaged. Each column is a corps beginning with the French Guard. Each group within a column is a division. The individual infantry blocks represent about four battalions. A few labels need adding. This project currently uses blocks but these might later be replaced with 2mm, 3mm, 6mm or 10mm figures. Using blocks (or counters) is a really good initial way of planning out an army.

This shows work in progress on one attempt to convert a map to Hexon. I've only just started to put the roads in. Scaling and superimposing the hex pattern is simple enough. Each hex is one kilometre across. The road pattern is fairly obvious though some roads have to be shifted a little so they cross hex sides cleanly. The main decision is whether a village is significant enough to be represented. It's either a hex or it isn't. I don't think there are any significantly wooded areas.

For the 1940 project, I've also been thinking about how to replicate the Hexon two-tone green and sand finish so that the model bases will match. Kallistra apparently use 'silver sand' which is, I understand, a gritty builders sand. I've previously used bird sand from a pet shop which is just like British beach sand, but in a recent thread on TMP Martin Rapier advocated the use of brown builders' sand which doesn't need painting, so I will be heading for a DIY store to get some. If I can spare it,  I may even put some of the sand under some rocking stepping stones on the back lawn.
Posted by doctorphalanx at 11:37:00