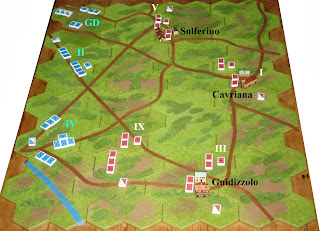 Solferino was the climatic battle of the Franco-Austrian War/Second War of Italian Unification of 1859 and my first 19th Century Grand Tactical project using Martin Rapier's Rifle and Kepi rules and Hexon II terrain. Some time ago I did begin collecting 10mm Pendraken figures for this, but I'm currently utilising the block armies.

I eventually decided to work from the map on page 59 of Richard Brooks' Solferino 1859 as it has already been stripped down to the essentials. Ignoring, for the moment, the northern, Piedmontese part of the action, I was able to get the main part of the battle onto 16 (4x4) Hexon tiles, which also happen to sit comfortably on my modestly-sized dining-room table.

Each hex represents an area 1 kilometre across. Woods are too small to be represented and high ground has not been considered. The road network has been created with 10mm wide felt strips, mostly in 12" lengths. These can easily be bent from side-to-side so there is no need to cut any curves. Cutting felt accurately is awkward. I marked it out with a ruler and a dressmaking pencil which leaves a white mark. I then cut it with scissors. All the roads shown took about half a square foot of material. I'm currently lacking blue felt for the canal and have temporarily employed a cut-up plastic bag. I haven't depicted any rivers. I don't know how significant they were.

The roads took quite a long time to set out. For a club night I would probably take a more rough-and-ready approach.
Posted by doctorphalanx at 15:28:00