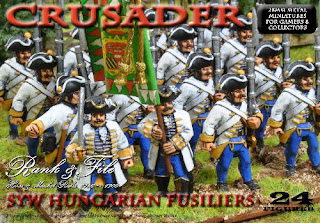 I don't suppose many people read this blog as a matter of course, but I find it quite useful for sorting out my own thoughts and plans.

My immediate current interest is in planning some armies for use with the 18th Century Maurice rules, so I sent off for some samples of 15mm figures. It's a long time since I painted any figures with detailed uniforms, and I was a bit taken aback by just how diminutive 15mm figures are! I certainly never intended to put in the level of detail that some people put on 6mm figures, but I'm beginning to question whether I could, or would want, to add even the basic required detail on figures this small. And that brings me back to the idea of 28mm figures after all.

Following some discussion on the Maurice forum, I'm also beginning to wonder whether my offbeat interest in the '45 and the '98 will actually give a good game, so now I'm looking at the Seven Years War where the armies have a better balance both internally and with each other. This is not the first time I've been here. Many years ago I got enthusiastic about the WRG 1685-1845 rules which prefigured DBx to some extent.

The 28mm figures I most like are the Crusader ones, but taking into account the time lag before being able to put painted armies on the table, I think I'll concentrate on making some card counters for the time being. After all, I've painted so many armies that have never or hardly ever see the light of day.
Posted by doctorphalanx at 09:55:00