The Wargames Association of Reading's Warfare show took place last weekend. It's one of my favourite shows along with Cavalier and SELWG (when it was still in South London).

This year's venue was Ascot Race Course which has an impressive building lit by natural light. What a pleasure after the awful 'aircraft hanger' experience at Excel. Saturday was an extremely cold day and the train from London had no heating. A bitterly cold wind was blowing in Ascot but the venue was a fairly short walk from the station and entry was handled efficiently. Strangely, there was no-one at the door giving out bumph.

I bought virtually nothing but I did take in the games. I don't attempt to catalogue the games at shows because others do this so well, but three caught my attention.

(Incidentally, I noticed when preparing this post that Blogger no longer 'holds' the photos you are uploading so if you are placing them one at a time you have to go through the same long process for each one. Blogger pretends to get better and better but actually just gets worse and worse.) 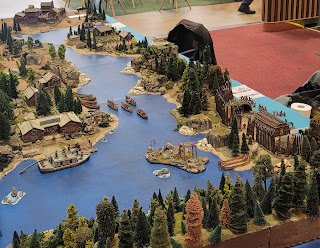 The heading photo and the two photos above are from a North American game of Muskets and Tomahawks presented by Combined Oppo's Wagames Group. Great work on the scenery including three grades of loose stones and gravel.
Huntingdon & District Wargames Society presented this Rome versus Carthage DBA First Edition battle using HAT 52mm figures. A great choice for demo games.