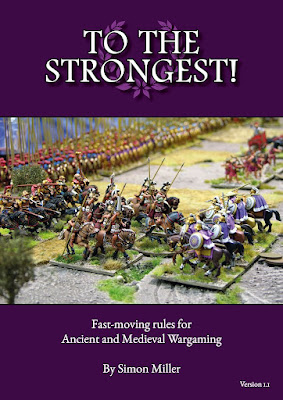 Although gaming massed battles with Ancients was once my main wargaming activity, I've done very little of that in recent years.I enjoy DBA but my circle of players haven't moved on to Third Edition and I don't want to take a backward step. I would never go back to DBM or its derivatives - too much unnecessary detail. I like Impetus basing but didn't take so much to the rules, though I haven‘t yet tried the current edition. ADLG was judged a good game but too demanding for a club evening. I’ve also played and enjoyed Sword and Spear but for one reason or another none of them stuck.And then, by chance, I recently noticed To the Strongest! by Simon Miller of The BigRedBatCave blog, a set of rules that has been out for some time but which I had previously managed to overlook despite being on Simon’s mailing list at one point. I’ve now bought the rules and army lists and a new gridded mat, gathered some playing aids and have begun to reorganise and even supplement my collection of 15mm Ancients/Medievals.I haven't yet played this game so I won't go into too much detail but they look very promising. Activation is at the game’s heart, providing the friction that reminds players they are mortal, and this is achieved not with dice but playing cards. Friction is essential in game design but too frustrating for some gamers! In TtS! activation failures are ameliorated by the ability of Generals to replay an activation card once per turn and there is also an amendment introducing group moves which reduces the chance of some units being inappropriately left behind. Players can also intervene by using 'Heroes' to replay missed 'to-hit' cards.The other big feature is that like Commands and Colors, this is an area movement game played on a 12 x 8 grid. Grids are not to everyone’s taste, but they allow players to concentrate on generalship rather than geometry, eliminate measuring disputes and speed up play. If figures and scenery are good and the grid not too obtrusive, it will look and feel like a miniatures game, not a boardgame.As a grid game TtS! doesn't demand any particular basing but I believe it's prudent to retain, more-or-less, DBX standards, albeit with the DBX bases combined onto larger sabot bases. As my 15mm Ancients/Medievals already have magnetic bases I can put them on steel sabots which means they will be detachable and still usable for Impetus, Dux Bellorum, ADLG, DBA or anything else my wargaming comrades agree to play.I decided on 80mm frontages and 100mm (4”) boxes which means that units will be two DBX elements wide and the 4’ x 2’8” playing area will conveniently fit my modest dining-room table.At the moment I am learning the rules but I hope to try them out in the near future.