It's more fun to look ahead than look back, and I thus take much more pleasure in outlining my plans for 2020 than reviewing what happened in 2019. Once again I'll be brief and to the point. This year I want to concentrate on three areas and these are going to be my personal priority for both painting and gaming. Because this spread is so much more focused than in the recent years, I feel emboldened to use words like 'projects' and 'plans' rather than just 'interests'.

Rampant games remain central to my gaming preference, especially as new armies are ready to be put on the table (if only based and undercoated).

Warbands/companies I’m currently working on include:
There are also some bits and pieces I'm adding to historical armies to create Men of the North and Arthurian Romance Dragon Rampant warbands. I also have a force of 28mm Feudals which I will be diverting to DR, but I'm still trying to think of magical elements to add that would be in character. Even Fantasy needs to be authentic!

Besides those I also have Dark Age and Late Medieval Armies for Lion Rampant, AWI and ACW armies for Rebels and Patriots and British, Zulu, Afghan and Egyptian armies for The Men Who Would Be Kings. Rampant games are also popular with other club members including Chris who has French and Indian Wars for RAP, Ian who has British and Mahdists and Bernard who has Boxer Rebellion for TMWWBK, and Simon who is working on Wars of the Roses in 10mm for LR. 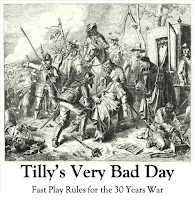 I’ve been helping to proof-read Steven Thomas's Tilly's Very Bad Day rules as they are being developed, but I really want to start playing them myself.

My 6mm Thirty Years War armies are still being painted but I based them first precisely so I could put them on the table straight away.

As with other 'base-before-painting' and 'play-while-painting' projects, I promise to do more painting before reusing them in a game.

A new version of the rules is imminent so as soon as that is published and I have digested it I'll be attempting to arrange a game.

I planned to get into Chain of Command in 2018 but never got round to it.

I have the rules and markers and a collection of 28mm US and German Ardennes (Battle of the Bulge) figures which are based and undercoated. I also have some ready-painted diecast AFVs and some scenery.

I started the Ardennes project at the beginning of 2008, before CoC was published. It's frightening how much time has passed!

Like Crossfire, CoC is highly innovative, specifically in the pre-combat patrol sequence and the way in which forces pop-up at jump-off points. It may take some grasping but I think it's going to be fun.