My second game of Rebels and Patriots was against my most frequent sparring partner, Ian. It was the same scenario as in my first game, 'First Clash at Lament Ridge', but set in the American Civil War.

Ian is a strong believer that rules covering an extended time period should nevertheless deliver a satisfying degree of period specificity. In his words:

"Do these rules really work in letting you believe that one week you're playing AWI and the next ACW? For me, not having played twice, the answer was "yes" because I realised, as a result of what you said, that the key lay in army creation and that's the important point. If you remember, we talked about the possibility of creating silly armies which would still be legal under the rules, but serious players like you and I can create period specific armies which would look and play quite differently from each other."

I couldn't express it better myself so I won't.

Once again I've got limited figures so I drew up the Company lists in advance.

Ian's Officer got Fortuna Belli giving a reroll of any set of dice once per game. I got Army Engineer which allows you to put one unit in breast-works if Defending.

"I chose tactics that I would use in any game - the bulk of my forces looking to seize the objective, cavalry watching one flank, artillery in the best place I could find for covering as much of the battlefield as possible, leader in the centre to maximise coverage."

My strategy was to press forward behind a protective screen of Skirmishers and, as far as possible, to avoid the enemy artillery. Ideally I would Attack to close quarters as my Confederates were Aggressive but Poor Shooters. 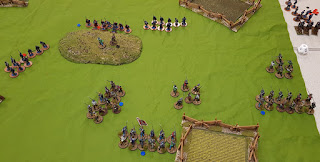 It was a close-fought game that could have gone either way. Ian's Officer's unit was routed and Ian hit 50% casualties, but he controlled the objective for two turns to my one, so Ian was judged to have won. However, this game was a little rushed in some respects and we missed certain tests and factors owing to lack of familiarity with the rules. Had we properly played by the book I think the outcome of the game would have altered to the detriment of the Union side, so there's probably not much point in tracing the course of the battle in detail. The pictures show the general flow.

A number of observations might be made. In no particular order: 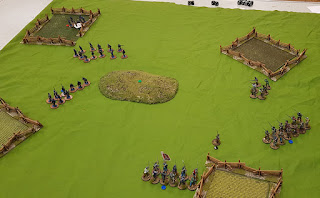 Prior to starting and given the use of so many Skirmishers,  we spent some time at the beginning wondering whether my Line Infantry could charge through my Skirmishers, a common tactic in other rules. First of all there would need to be a gap that allowed the formed unit to see the target, but what happens if the charge falls short? 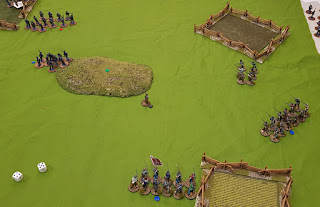