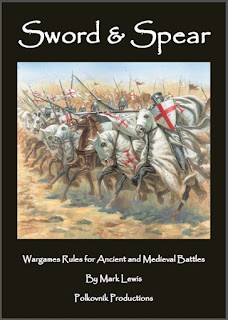 S&S's central mechanism is the allocation of dice to units allowing them to be activated with potential bonuses for fighting or movement. A particularly clever aspect is the way in which, for combat, strings of dice are compared resulting in damage or tests leading to damage. I thought this mechanism was extremely elegant and extendible...

There is no doubt that S&S works superbly as a game, and that is the first requirement. The question of whether it works as a simulation or is 'realistic' begs huge questions about all tabletop miniature wargames. The most questionable aspect is, perhaps, the way in which you can micro-manage the odds for each combat. Suffice it to say that S&S seems to have all the elements you'd expect in any set of Ancient wargame rules but without unnecessary detail or tortuous linguistic riddles. It's thus a quick and easy game and ideally suited to the limitations of club evenings.
Posted by doctorphalanx at 15:50:00