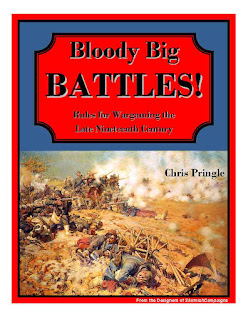 My interest then took another turn with Martin Rapier's Rifle & Kepi rules and the ceramic blocks I used for Solferino. I like this game and would have played it more often, but it requires quite a bit of work to research the OOBs, produce a hex map and decide on the starting positions. I also subsequently bought a copy of the Franco-Prussian War rules To The Last Gaiter Button (Realistic Modelling Services) which uses a Square Bashing style square grid, but they also languished in the drawer unplayed.

For one reason or another (other projects, lack of time) I've never taken the plunge, but I'm always on the lookout, and back in March of this year I bought a copy of Chris Pringle's Bloody Big Battles! and joined the particularly vibrant BBB Yahoo Group. But once again things slid and it was not till the Reading Warfare show in November that I finally encountered a BBB game. To be precise, I didn't actually see the game being played, but I did see it being packed up and I was extremely impressed by the busyness of the terrain and the superb scratch-built buildings. I do like games with a landscape so vast that you feel you could get lost in it. It seems to take away that edge of the table feeling. 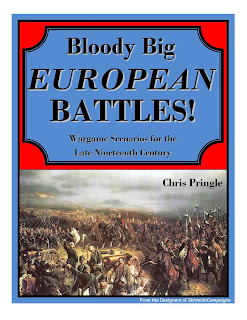 Anyway it was enough to send me digging out the rules. BBB was years in the making and is a serious undertaking. Although it can be played as a points-costed pick-up game, it was essentially developed for large historical scenarios with set OOBs, arrival times and detailed maps, all reminiscent of Fire & Fury. The scenarios provided in the rules, the Bloody Big European Battles! scenario book, and via the Yahoo Group represent a huge amount of research by Chris and his collaborators.

Each 1" square base represents 1000-1500 men, and these are grouped in divisions or brigades which are the tactical units. The groundscale is 1” to 150-250 yards. Small arms ranges are greater than you'd expect as the bases represent a centre of gravity for each unit which is assumed to throw out skirmishers etc.

The rules are simpler than they look, and are essentially confined to the basics of movement, shooting and assaults in order to support large games without unnecessary detail. Terrain - so important in determining the course of real battles - is extensively covered.

It is obvious from the scenario contour maps that creating detailed, accurate terrain is both fundamental and a real challenge. Various options are discussed on Chris's BBB blog, but it set me thinking about modular approaches that would combine reasonable accuracy with potential reuse.

My mistake in playing the game related to the all-important movement table which also covers morale. The table omits mention that Disrupted units automatically rally if they achieve a full or half move. It's clearly stated in the text beneath the table, but in this age of skim reading I missed it. Failing to understand the true probabilities of 2D6, I also had the impression that movement easily stalled. I now know that the actual chance of a unit under command stalling is only 1 in 12.

The fundamental mistake about rallying, coupled with lack of experience, lead to an unrewarding game in which we seemed to throw a lot of dice without decisive effect. Having sorted out these issues I can't wait to play the game again, but that won't be till after Yule. I will be reporting on that game and, hopefully, many others, as I am very keen to pursue BBB in the coming year.