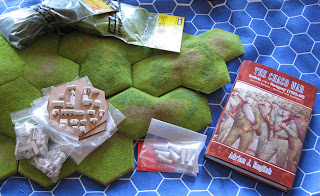 Also on the Magister Militum stall, I caught a look at the Figurehead 1/6000 WW2 ships. The castings are fine indeed, but very small, and that has left me wondering whether to go 1/3000 instead.

Noted for future reference were the ready-made, ready-painted Napoleonic ship prototypes for the forthcoming Sails of Glory game. I don't know if I'd want to play the game or not, but accumulating some ready-to-use 1/1200 Napoleonic ships would be tempting if the price is acceptable.

Inconveniently absent were Irregular Miniatures as I had wanted to see their new 15mm Chaco War range. I did, however, pick up English's book on the war from Caliver.

Finally I had a pleasant chat with someone on the Continental Wars Society stand who turned out to be Charles Grant who I'd never met before.

Overall a very busy show with loads of impressive scenery and interesting trade stands.
Posted by doctorphalanx at 18:18:00