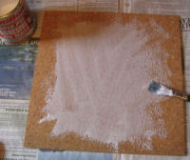 The tile is coated with undiluted PVA (Elmers) wood glue. 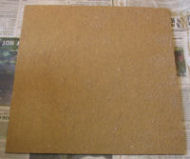 Bird sand from a pet shop is added while the PVA is still wet.

A wash made from emulsion paint and water (50:50) is added. The sand soaks this up. The paint was Homebase Sanctuary Suede. It's chocolatey but not quite as red as these photos may suggest.

This picture is taken immediately after completion of the emulsion wash. 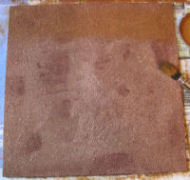 The tiles were then dry-brushed with a lightened version of the emulsion mixed 7:1 with yellow acrylic. I noticed at this point that there was a certain amount of warping but this mainly took the form of the centre bulging upwards. I have now taken to storing the tiles with a small wad of paper underneath them at the centre to bias them towards being convex rather than concave. This means they butt well together and don't spin round. 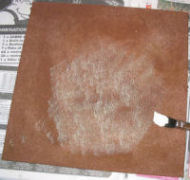 The tile is dry-brushed with cream. The application is not quite as extreme as this photo suggests.

When doing figure bases I dab on patches of PVA and then apply Woodland Scenics static grass. For the tiles I decided to use WS Scenic Cement. 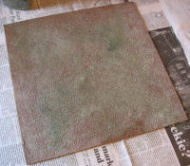 A 'misty' spray of Scenic Cement is followed by an application of dark, light and medium static grass. The tile is then immediately resprayed to seal.

The tiles as finished and pictured en masse.


I've since begun to create a modular hill system but that's a WIP that I may post about separately.

The tiles were primed with PVA as above and then painted with a very dark brown which is almost black. 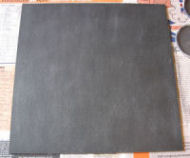 The tiles were then dry-brushed using 4 parts of the same emulsion to 1 part white acrylic. I found dry-brushing such a flat surface was difficult. After some experiment I dry brushed in straight lines against the grain which was just about discernbable. It's not as even as I'd like it but it will do.


The urban tiles were originally created for my Stalingrad project and can be seen in some of the game pictures. Stalingrad, however, was a very green, garden city, so I've subsequently decided to use only the green tiles with black felt for roads and pavements added to the buildings. The urban tiles may be used for more intensely urban cityscapes. How best to depict an asphalt jungle is an interesting challenge.
Posted by doctorphalanx at 17:14:00