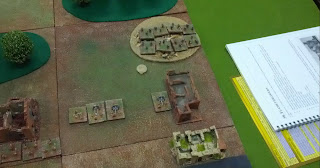 The Germans opened with a 'pre-game' stormtrooper assault on their left flank which swept all before it. In the photo above (taken from the British side) the stormtroopers occupy the rocky knoll objective (upper right). This part of the British line runs from the chateaux objective (lower left) to the village (lower right). 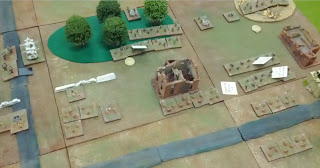 The stormtroopers push forward but I manage to shoot up the German cavalry in the centre, slowing the tank. The British forces facing the tank and wood (lower left) enjoy hasty defences. Yes, I do intend to paint them. 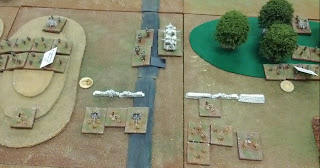 Another German attack sweeps over the hill (left). 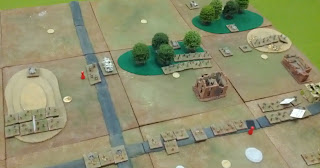 At this point I felt there was little I could do except for shuffling the reserves to block the stormtroopers and otherwise falling back.

The Germans soon took all the objectives and the British were all but annihilated. Trying to learn the rules myself and simultaneously teach them to my opponent meant that I wasn't playing very competitively. Nevertheless, my impression is that the defender has his work cut out, or, at least, a steeper learning curve.

I drew up the army lists in advance, one optimised for attack and the other for defence. Next time I will give the defenders more infantry and less artillery. Artillery is brittle if assaulted and the scenery closes down fields of fire.

We soon began to pick up the movement, assault and shooting factors, and once these have been absorbed I think the game will move very quickly. Square Bashing 2012 is a clever game written in digestible English and we both enjoyed it.