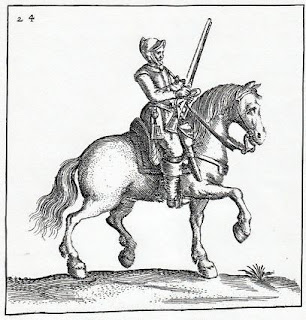 In order to help develop some scenarios for Tilly's Very Bad Day and to better identity the units I need to model, I've been spending a lot of time analysing the Orders of Battle given in William P Guthrie's Battles of the Thirty Years War: From White Mountain to Nordlingen, 1618-1635. This turned out to be very time-consuming but somebody had to do it, and I had a pressing interest in narrowing down what additional figures I needed to get.
I picked three battles from the Swedish period for which details are quite complete and readily available:

I've forwarded the results of this research to TVBD author Steven Thomas, and am looking forward to seeing scenarios produced in due course.

For the Catholic-Imperialists, Guthrie sometimes lists units as Cuirassiers or Arquebusiers but often just describes them as "CR" (Cavaly Regiments). For these, it was necessary to make an estimate so we took the numbers and apportioned them to Cuirassiers and Arquebusiers in a 2:1 ratio.

The other big surprise of this exercise was the discovery that most of the 'Swedish' Horse were not Swedish Horsemen, but German Cuirassiers and Arquebusiers - the same sort of cavalry to be found in the opposing armies.

My two initial Baccus orders are now on the way so I should soon be able to make a decision about how many figures per base.

Tilly's Very Bad Day is being continually updated and has now reached version 1.3. It remains downloadable from the same page https://balagan.info/download-tillys-very-bad-day-fast-play-rules-for-the-30-years-war .
Posted by doctorphalanx at 05:37:00