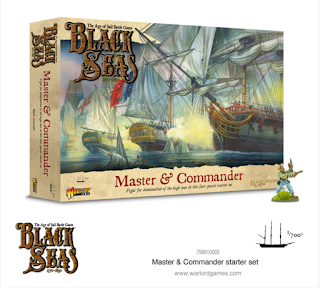 It's at times like these that I need to think of new wargames armies!

I have lots of ongoing projects to fill in and complete, but most of these are actually now at a stage where I could soon put them on the table, somewhat anaemic (undercoated) though they might appear. There are various 28mm Fantasy armies for Dragon Rampant about which I've so far revealed very little but have much to illustrate, 28mm Buccaneer and Spanish armies for The Pikeman's Lament and 28mm Militia and Insurgent forces (1798) for Rebels and Patriots. I would like to get some 28mm Woodland Indians, Southern Militia and Riflemen in hunting-shirts for AWI (Rebels and Patriots) and some 28mm Sudanese and Bashi-Bazouks for my Colonial Egyptians (The Men Who Would Be Kings) but these would be all relatively small acquisitions.

Since emerging from the operating theatre, I've come up with two new projects to provide retail therapy. The first is the 1/700 Napoleonic naval game, Black Seas from Warlord Games. For those who don't know, this is one of those out-of-the-box games of which I thoroughly approve. I saw it demonstrated at Salute and it looked user-friendly.

It is designed by Gabrio Talentino, author of Cruel Seas and a regular nice guy. Cruel Seas didn't appeal to me and apparently had lots of errors, but I'm confident that mistakes have been learnt. Anyway, I pressed the button to pre-order a Master and Commander starter set, and look forward in particular to the release of the Americans. The ships need a little assembly but are essentially ready-made and the customisation options have been very cleverly thought out.

The other project that has been consuming my attention is Steven Thomas' Tilly's Very Bad Day Thirty Years War rules. Over the years, lots of years, I've have been all over the place with different ideas for scales and basing arrangements, but I woke up this morning with thoughts of 6mm figures on 60mm x 30mm bases and just settling on one generic infantry type! It's the smallest one can go and still see character, and it will be very straightforward to complete.
Posted by doctorphalanx at 09:33:00