My plea for help in my last post didn't elicit any responses so I'll move onto the next stage...

My playing companion, Ian, has argued that the problem is a simple contradiction. On the surface this does appear to be the case. He has suggested we adopt one option or the other, that is that to be eligible as a target (1) a unit's nearest edge must be wholly within Line of Sight (LoS) as implied by the bullet point,  or (2) a unit need be only partially within LoS as implied by the diagram.

I have tested both these options, but neither of them seem to work. 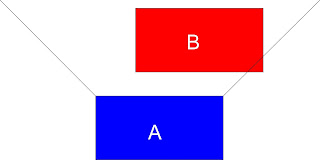 In this example A cannot shoot at B because B's nearest base edges is not completely within A's LoS. This would be ridiculous!

At first this seems more realistic. A shooting unit would not have to see all of a target unit in order to shoot at some of it. But what happens when the target is obscured by other units or terrain? Is there a point at which a gap is so small that shooting becomes negligible and shouldn't be allowed? 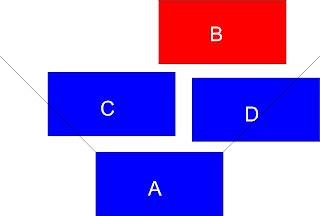 A are shooters. B is the target. C and D are intervening units. B is within A's LoS but it's not exactly a clean shot.

Basically, neither of these interpretations seem to work.

Billchuck (on Lead Adventure Forum) had  problems replying here but sent me a private message in which he said:

'...keep in mind that often there will be two “closest edges”. I would play it as “if all of one of the nearest base edges is entirely visible"...'

This approach would solve the problem. A target can be partially within sight but you have to be able to see the whole of at least one of the nearest sides.

I had more-or-less assumed that the diagram was probably right because the author would have spotted any inaccuracy in something so visual.

I had also assumed that the bullet point had some sensible and necessary intention behind it, and that it was probably introduced to avoid the 'shooting through gaps' problem illustrated by my second diagram.

I was thus very reluctant to accept the idea of simply jumping one way or the other without resolving the apparent contradiction. I was not able to resolve the issue myself, but this is a very elegant solution and I am eternally grateful.

On further reflection I'm not entirely sure that seeing the whole of one of the nearest edges is a complete solution...

If you look at my second diagram but imagine that B is shuffled along so that its right-hand edge is opposite the gap between C and D, A can then see the whole of one of B's side edges and it becomes a valid target.

I think the time has come to consider a house rule.

I am thinking about adding: you must also be able to draw uninterrupted straight lines between the front corners of the shooting unit and two corners of the target unit. (Obviously the two lines shouldn't cross and there should be a clear field between them.)

Or just “the entire front of the shooting unit must be able to see some part of the target unit.”

Interestingly this shifts the test from the target to the shooters.

“A target is valid if at least part of it is in range, one of its (nearest) base edges is entirely visible, and the whole front of the shooting unit can see some part of the target unit.”

Beyond that one might be forced to just use common sense! It seems to work for most people.
Posted by doctorphalanx at 14:58:00