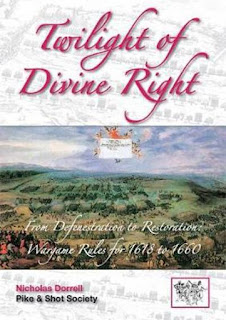 I never got round to playing Twilight of the Sun King but I’m currently looking for a set of Thirty Years War army-level rules and had no hesitation in ordering the 17thC variant of TotSK - the equally evocatively entitled Twilight of Divine Right - together with the scenario book of TYW battles.

The rules are written by Nicholas Dorrell and published by the Pike & Shot Society.

Regardless of how the rules might play, my first inclination with any new rule set is to look at the unit types, basing, and overall game ‘size’ in terms of elements and playing area.

The game measures in Base Widths (BW) which can be any reasonable size, but 60mm is suggested with most base depths half that. However, most units consist of two bases and would thus occupy an overall footprint of 120mm x 30mm. As the bases are always placed side by side it isn’t really necessary to use two physically separate bases. A single base would suffice while remembering that a BW is half that. Using two bases would maintain more compatibility with other rules and would be fine for Regiments drawn up in two Battalia with one Battalia on each base, but would not be so good for Early Tercios which I wouldn't really want to split across two bases.

If using 60mm wide bases (120mm-wide units) the table typically needs to be 6’ x 4’ and can go up to 9’ x 5’. I’d certainly want to use smaller bases/units and a smaller playing area, as long as that didn’t make measurement and movement too fiddly. I wasn't quite sure what that size should be but I received some very helpful advice on the TotSK Yahoo Group.

The smallest measurement in the game is the range of pistol cavalry at a 1/4BW. Assuming you didn't want this measurement to go below 1cm, the unit bases would have to be at least 80mm wide (i.e. BW of 40mm). That would reduce the table size to two-thirds which would be 4' x 2'8" up to 6' x 3' 4", which would be much more manageable sizes for the space-challenged.

So how many units would you need for a battle? The smallest scenario has 21 units while the largest has 80. With numbers of that order and my preference for smaller unit bases, I’d probably go for 2mm blocks, Kriegspiel-style blocks or MDF counters, but all these musings are highly provisional.

Rules author Nick Dorrell mentioned a possible reason to stay with 2 bases per unit, rather than 1 large one. For the largest battles you can then use a single base as a unit.  That's a very interesting option as it instantly halves the figures and playing space you need for larger battles while retaining visual impact for smaller ones.
Posted by doctorphalanx at 10:04:00