Thoughts on grids and hexes 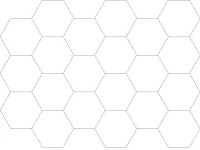 I'm increasingly drawn to grids and hexes as opposed to 'free form' measurement, a split in approach that goes back to Joseph Morschauser and Donald Featherstone. The only grid/hex game I play at the moment is Square Bashing, but I have plans to extend this both for post-WW1 tactical games and pre-WW1 grand-tactical games.

I've never played hex boardgames very much and I originally found miniature wargaming with grids rather strange. Unlike board wargames you can't literally stack miniatures, but you can set limits either by numbers (e.g. Square Bashing) or model footprint (e.g. Bob Cordery's Hexblitz in which I've recently taken an interest). Looking back now, it feels like moving from the mushy world of analogue to the crunchy precision of digital.

A grid formalises measurement of movement, range, facing and contact with unarguable precision. You lose the infinitely variable angles, and movement and firing distances are shoehorned into multiples of the grid.  There is some loss of granularity but free form measurement also has its fixed points e.g. base sizes, being 'in range', being at half range, being behind the flank, and measurement multiples of 1" or 1 cm. The rigidity is still there, it's just harder to measure accurately.

The major downside of grids/hexes is aesthetic, and especially the impact on scenery. Here large squares (e.g. 6" x 6") are more forgiving than small squares or hexes. Some of the gains include:


Another advantage of area movement rules is that basing requirements can be more relaxed and authorial rewrites won't force you to rebase an army several times during its wargaming lifetime.