Bonnachts. I'm depicting these as axemen. The figures are all from the QRF Tudor Wars range.

Redshanks. Viking Forge via 15mm.co.uk. It's a pity they're all in the same pose, but I wanted mailed Redshanks and these were the only reasonably-priced source. 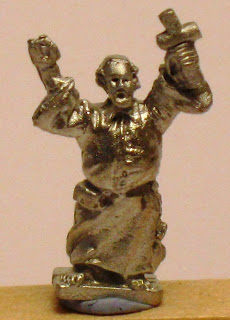 Priest. This figure is from the Peter Pig pirate range and is obviously modelled on Father Jack Hackett.

I've photographed the figures using my new light box and an overhead daylight lamp. The tracing paper gives a very grey cast so I'm aiming to replace it with white tissue paper.

My camera is a Canon PowerShot A590 IS. I used a mini-tripod and set the camera to aperture priority, but I don't really know what I'm doing yet. I use the camera for snapshots. Maybe I need something better, but my first priority is to improve the use of what I've got. The pictures were adjusted using Auto Correct in Microsoft Office Picture Manager and rotated in Photoshop to make them more level. 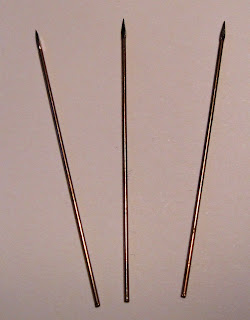 Pikes. If there's one thing I can't abide it's bendy pikes. I'm therefore replacing all pikes and similar with these excellent 50mm wire spears from North Star. Luckily the Khurasan pikes are not moulded on so I don't have to cut them away or drill holes. At least with 15mm and above it's practical to replace pikes. It's not really practical for 10mm and certainly not for 6mm which rather puts me off doing pike armies in those scales.

These pikes are genuinely sharp and will discourage other players from squashing my figures. In a previous life my ancient figures were notorious for their pins and piano wire spears, but they've been out of action for a long time.