Although open to change in figure scale and extendable to larger battles, the basic game uses a modest number of 15mm figures on a 2' x 2' table. The figures are mounted on 30mm square bases in numbers varying from 2 (skirmishing types) to 8 (pikemen). Armies consist of about 12-15 bases forming a battle. You can add additional battles and an extra foot in table width for each one.


The idea of doing something Elizabethan has been gnawing on my mind for some time, beginning initially with 28mm figures. As relatively few figures are required, I had entertained using this scale which would show off the distinctive costumes of the period. More recently I caught sight of the Pendraken 10mm Elizabethans which, though diminutive, are very distinctive, and I was just about to order some... 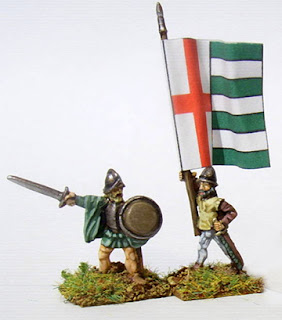 Then, while doing some background research, I stumbled across the Khurasan 15mm Irish and English  ranges. They are beautiful figures exactly focused on my main point of interest (Tyrone's Rebellion) and quite comprehensive. In 15mm, it will also be possible to supplement them, if necessary, from the ranges of other manufacturers.

I will probably do a Royal English army, an Irish army and an English rebel army.

In recent times I've painted mostly 20thC figures and my approach has been white undercoat, washes and a stain. These more intricately coloured figures will require a different approach, but I still want to keep it simple. My current plan is:

Figures predominantly in armour (e.g. mail-coated galloglasses) would have an initial black wash and that would effectively provide the armour finish. Horses will probably be white undercoated and then given a heavy wash in black-grey or brown to provide the main horse-flesh colour. Gun carriages would seem to have been red or natural wood.
Posted by doctorphalanx at 11:44:00