This is another article from my old website and describes how I paint and base 20th Century figures using washes over a white undercoat and then staining. Most of the figures I've painted in recent years have been 20th Century with drab uniforms, and I think this approach works well for that era.

This article shows 10mm and 15mm figures. I also used the same technique on my 28mm IWI figures. I'm not sure whether it's applicable to earlier, more colourful, periods. I did start painting some 15mm ECW figures along these lines but the project stalled so I don't know what the outcome will be. 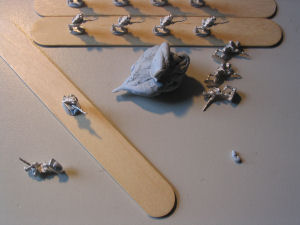 Some 15mm Peter Pig figures are 'Blu-Takked' to tongue depressors (giant lolly/popsicle sticks) prior to spray undercoating. These particular figures are Moorish Regulares being added to my Spanish Civil War armies which I use with Crossfire rules. The figures on each stick are identical. This greatly speeds up painting. 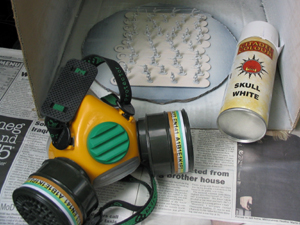 The figures are undercoated using Games Workshop Skull White acrylic spray paint. This is done out-of-doors with an appropriate half-face respirator. I use only one coat. If the weather is too cold and wet I will undercoat indoors with white gesso. 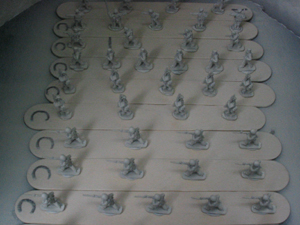 The sprayed figures. Any gaps can be patched up with a wash of white acrylic. 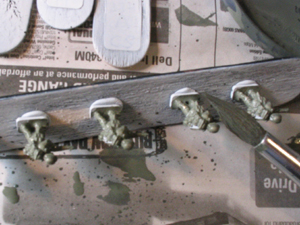 The basic colour is applied as a very thin wash. Cover the figure overall and avoid leaving any white gaps.

As is the 'Way of the Wargamer', my SCW extensions project was overtaken by my WWI project - 10mm Pendraken Late WW1 models for use with Peter Pig's Square Bashing rules. All the rest of the photos are of these. 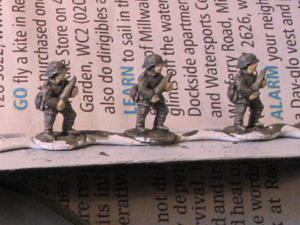 Detail (e.g. flesh) is spot painted as appropriate. As all the figures on each strip are in the same pose, this can be done quite quickly. Figures are Late WWI German artillerymen. 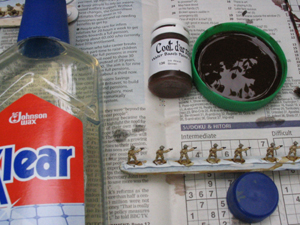 The completed figures are washed with a stain comprising a 50:50 mix of Johnson's Klear (US: Future) acrylic floor pollish and water with enough drops of brown ink and black paint to make the wash opaque when in its mixing bowl.  Unfortunately, the formula of this product changed and it is now less versatile, and I haven't yet found an equivalent of the original. 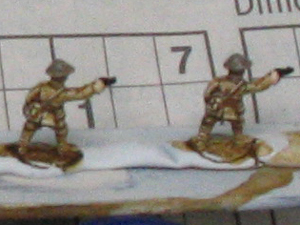 The figures come out subtley 'shaded' - for so little effort! Figures are Late WWI British officers. 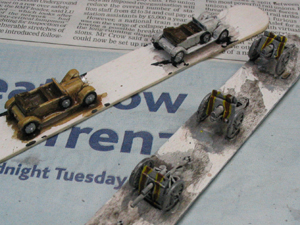 WWI staff cars, and a British fieldgun and two howitzers in dazzle camouflage. Same shading treatment is used for vehicles. 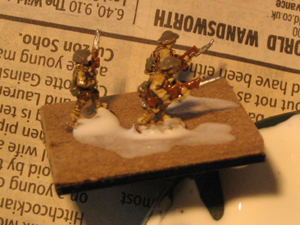 These British infantry have been mounted on combination MDF/steel bases which are now coated with thinned PVA glue (USA: Elmer's). The glue is painted up and over the figure bases in order to hide them. If these had been 15mm figures, I'd have used Tetrion/Polyfilla (wall crack filler) to hide the edges of the figure bases. 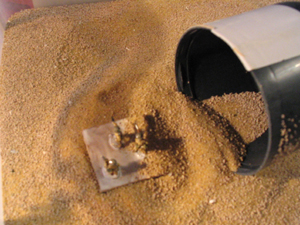 While the PVA (or Tetrion) is still wet, the base is covered with bird sand (obtainable from a pet shop). Some larger grit (sold as model railway ballast) is included to give the impression of larger stones when basing 10mm or 15mm figures, but not for 6mm or smaller. 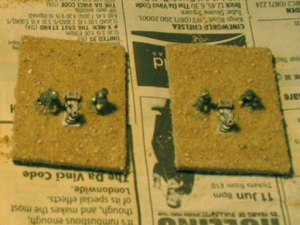 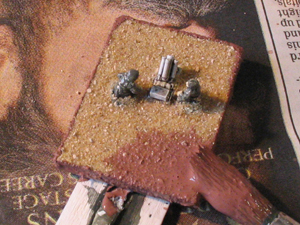 The base is coated with watered-down, earth-coloured emulsion paint. Firstly, I apply it fairly thickly around the edge to seal the MDF. Then I 'paint' the sand with clear water. I do about ten bases at a time, and while the sand is still wet I add an emulsion wash. The dampened sand surface soaks this up like blotting paper so there is no need to get close to the figures and you can use a big brush. Although emulsion is cheap, colour ranges keep changing so I am now tending to use 'proper' acrylic paints for base work. 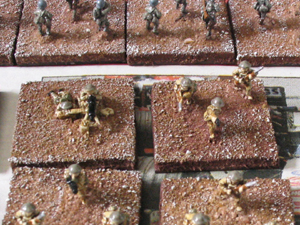 The bases are then dry-brushed with a lightened version of the emulsion, and, finally, very lightly dry-brushed with white or cream. I use yellow to lighten this paint. White makes it look too pink which is very unmilitary! 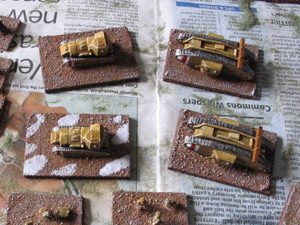 Irregular patches of thinned PVA are dabbed on the bases, and these are then more-or-less buried in puffs of static grass.

All models are finally sprayed with Games Workshop Ardcoat acrylic varnish, which seals the static grass and reinforces the figures. I use two coats, and again this is done outside using a respirator. 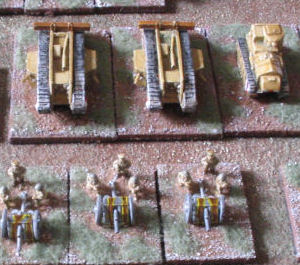 The completed models. They may not win any painting prizes but they represent my optimum ratio of effort-to-results. With any models, it's usually bases (and flags) that comprise the largest areas, so these are the aspects worth investing in.
Posted by doctorphalanx at 09:37:00