My last post described using a white undercoat, washes and a stain to paint 20th Century figures. For my more colourful 10mm 1690 armies I spot painted over a black undercoat, but I find it increasingly difficult to see detail on a dark surface. More recently I have also experimented with the method very ably demonstrated by Nik Harwood (http://nikharwood.pbworks.com) in which figures are based first and then given a dark brown undercoat, followed by spot painting of the bits you can see/reach. I am using this approach for my 10mm ACW armies currently under the paint brush. It works, but I found it rather like painting through a keyhole so I doubt if I will use it again. 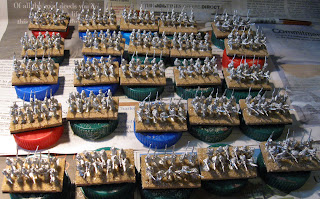 Figures based but not painted. They are a mixture of UK Minifigs and Pendraken (old range). The idea was that I could start using them in games, but 10mm muskets and bayonets are a bit fragile without reinforcement with paint and Ardcoat. 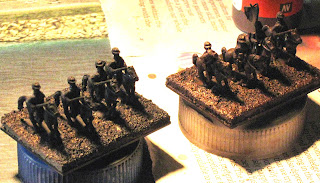 Some Union cavalry with the basic undercoat and the bases textured and painted. 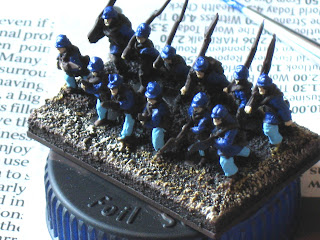 Union infantry. You can't get at the inside. Detail is 'lost' in the shadows, but that's the idea of it.