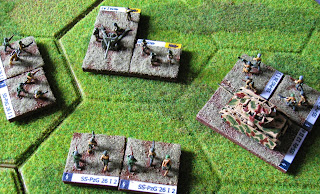 My WW2 platoon-base hex rules are at the concept rather than the mechanism stage. Drafting and playtesting are even further off. It may be difficult to find the mechanisms to realise the concepts, but you have to start somewhere and the beginning seems as good a place as any. Please note that where factors are given values, these are purely to illustrate significant differentials. They are just place-holders for the final values.

Discussion of resolving firefights en masse on TMP has helped me to identify and clarify three levels of combat which I would like to represent. These are (a) ranged fire, (b) close range firefights, and (c) assaults.

Ranged fire would typically occur between AFVs and would be a question of hardware (range, gun, armour - frontal/other, cover - hull-down). I assume that this sort of combat would be element to element at the player's discretion, subject to target priority rules, e.g. tank-to-tank, infantry-to-infantry and proximity. It would also have to include HMGs and mortars firing on infantry. This sort of thing is beloved of hardware enthusiasts and the very substance of most rules, but I see it as a matter of detail to be filled in later!

Long-range small arms fire, however, would cause only pinning. Pinning would not be an absolute state as in Crossfire. Troops could be prompted to move forward depending on their quality and at potential cost. Pinned troops that can and do move back out of the line of fire would become unpinned, as would troops no longer being fired on. Pinning is a question of whether troops are being fired on at all, not that they are necessarily taking casualties so it could be element-to-hex rather than element-to-element, and be another penalty for 'over-stacking'.

I'm now persuaded that even troops in the 'open' can find some effective cover if they go prone, but that getting up and moving around in an enemy fire lane is dangerous. That needs to be reflected in the rules.

Close range firefights would occur between troops in adjacent hexes with the aim of suppressing each other. Firefights would be automatic, i.e. players would lose direct control once opposing forces are brought into contact. They would be resolved en masse by adding up total unit values (qualified by tactical factors such as cover) and comparing them. These are infantry affairs. AFVs would use HMGs. German platoons (owing to their LMGs) and armoured infantry (with access to more ammo) would have more suppressive power. Already suppressed units wouldn't count.

By relating the suppressions inflicted to the strength of the enemy in adjacent hexes, we ensure that the damage occurs at the hottest points without having to go into too much detail. The actual units suppressed could be chosen randomly but owner's choice would be quick and convenient and engages the player a little.

Suppressions taken on infantry cause them to hug the ground and become totally inactive. 'Suppressions' taken on AFVs force them to close down or withdraw 1 hex (owner's choice). We can't really refer to suppressing armour, but I'm persuaded from other discussions on TMP and the Crossfire Yahoo Group that small arms fire can force armour to close down and/or withdraw and that this is significant. This gives infantry a chance to buy time.

Infantry fire would be subject to random ammo depletion. This could potentially happen every time they are in combat and would be recorded in two stages before taking effect. This is to discourage unrealistic long-range wastage. Resources need to be harboured. Ammo depletion would be recorded with on-table markers. Units with depleted ammo would not be able to engage in ranged fire and would fight at half effect in firefights and assaults. I would allow them to assault, if only as an act of desperation like Joshua Chamberlain at Gettysburg! The idea is that if a firefight bogs down, troops begin to run out of ammo.

Assaults would be attempts to overrun enemy and take ground. They would be launched against an enemy-held hex from one or more adjacent hexes, with, possibly, supporting hexes taken into account (for both sides). The participating units would be at the attacker's discretion. Close combat would be bloody and decisive and decided immediately. There would always be a winner and a loser. A draw on points would be a win for the defender.

The defender may have a chance to withdraw, losing any guns, suppressed or any resulting over-stacks. Factors would be totalled for each side and compared. All modifiers would be cumulative, e.g. an elite unit in cover would be 1 unit x 2 for elite x 2 for cover = 4.


Losing defender would automatically lose any suppressed or guns and these would be removed immediately. They then lose 1 for every 2 assaulting enemy units (owner's choice). Any survivors withdraw 1 hex (if possible) or are destroyed (if not). Winning attacker occupies hex with at least one of the assaulting units up to the normal stacking limit. Losing attacker loses 1 unit in each attacking hex for every 2 defending units in contact (owner's choice) and the remainder fall back 1 hex from where they started the assault. If they cannot move back from their start hex they are eliminated.

The suggested mechanisms for the mass resolution of firefights and assaults are influenced by Martin Rapier's Rifle and Kepi which I played recently, although they are used there at a completely different level of representation. I fully realise there may be lots of holes here through which a rules lawyer could drive a Tiger II, but I'm trying to envisage this cinematically. I'll attempt to fill the holes later.
Posted by doctorphalanx at 12:56:00