I played a second 'Quick Game' of the new Square Bashing 2012 rules, this time against a different opponent. It was another attempt to learn the rules and try things out, rather than to play competitively. At least that's my excuse. I played the British attackers against a German defence. This time the defending army was more balanced (more infantry, less artillery).

My opponent was quick to pick up the rules and to play them to maximum advantage! By placing the transverse road (and thus the crossroads objective) in Row 4, the defender was able to incorporate the other objectives into his Row 3 defensive line. My opponent was also struck, as I was in my first game,  by the amount of scenery. I find this a good aspect, adding to the realism, the game play and the aesthetics. 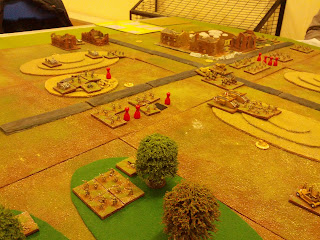 Impatient to try things out, I launched two frontal infantry assaults, on my right against a village with hasty defences and on my left-centre against a hill. This was a bad idea. Both assaults were bloodily repulsed. Of course, I should have waited for the tanks, bypassed the strongpoints and cut a swathe through the centre. I should also have capitalised better on my +2D6 High Command order Fighting bonus. 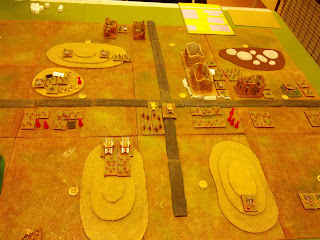 All the photos were taken at the same point in the game. They are all from my side of the table. The British are all to the nearside of the transverse road, the Germans to the other. The red casualty markers indicate losses during the assaults. 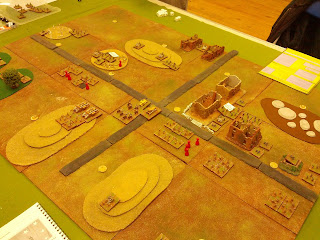 The British heavy tanks were outpaced and never got into combat. Tanks are poor in defence, and although it didn't actually happen in this game, we noted that a tank-heavy group moving to attack could be very vulnerable to a pre-emptive counter-attack.

We drew a little crowd of fellow club members. One thought that tanks ought to be able to fire, but the group generally seemed impressed with the game, if not my generalship.

Last time I thought it was hard to play the defender. This time I got soundly thrashed as the attacker. A balance of sorts then.
Posted by doctorphalanx at 09:42:00